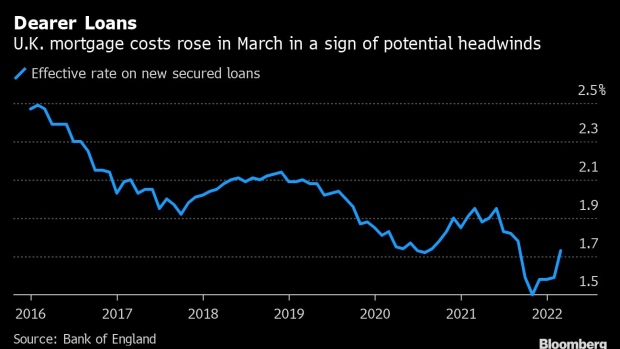 Estate agent 'for sale' boards outside a block of flats in Birstall, U.K., on Monday, July 5, 2021. Global valuations in the property markets are soaring at the fastest pace since 2006, according to Knight Frank, with annual price increases in double digits. , Bloomberg

The cost of mortgage borrowing in the U.K. jumped the most in at least six years in March, suggesting lenders are starting to respond to tighter Bank of England policy as officials battle to rein in inflation.

The effective rate on new loans rose by 14 basis points to 1.73%, BOE figures published Wednesday show. It was the biggest increase since at least 2016 and took the cost of borrowing to the highest since September.

More expensive loans may act as a brake on the housing market, which boomed during the pandemic. Competition between lenders drove the cost of borrowing to record lows last year, helping consumers finance ever more expensive properties.

“Demand on the purchase side remains strong, but we are just beginning to see some subtle signs of slowing,” said Simon Gammon, managing partner at Knight Frank Finance. “Rising mortgage rates and uncertainty over the economic outlook is clearly taking a toll on sentiment. We expect mortgage approvals to fall in the months ahead.”

The BOE delivered a third successive interest-rate increase in March and is expected raise borrowing costs again on Thursday, adding to the cost of living crisis facing consumers.

The BOE figures showed the housing market remained in good health in March. Lenders approved more mortgages than forecast, and the value of loans advanced to 7 billion pounds ($8.8 billion). That was the highest since September, when buyers rushed to tie up deals before the expiration of a tax break.

The estate agent Savills noted that the average mortgage rose to a record 237,021 pounds, 13.6% higher than a year ago.

“The imbalance we’re seeing between the supply and demand for homes to buy may be due, in part, to a rush to secure a mortgage before we see interest rates rise further,” said Lawrence Bowles, director of research at Savills.

A BOE survey carried out in March found banks planned to significantly scale back mortgage lending amid fears that borrowers could start to default on their debts.

The pressure on family budgets from soaring inflation is already leading many people to take on unsecured debt to pay the bills.

Consumers borrowed a further 785 million pounds on charge cards in March following a 1.14 billion-pound increase in February, which was the most for any month since 2004, the BOE said.