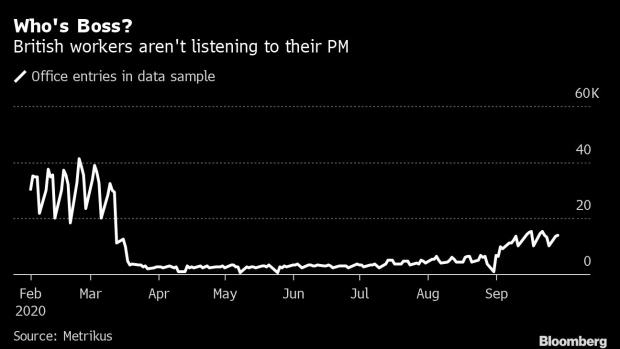 Pedestrians walk past the 30 St Mary's Axe, also known The Gherkin, in the City of London, on Sept. 28,. , Bloomberg

(Bloomberg) -- White-collar employees in the U.K. are ignoring their prime minister’s pleas to work from home.

The number of people entering office buildings has shown no decline since Boris Johnson last week asked workers to stay away from the office if they can, according to data from Metrikus, which installs sensors in buildings in the U.K.’s largest cities. The request came as the government introduced tougher restrictions to fight an acceleration of Covid-19 infections.

The Metrikus data show that office occupancy doubled in the first half of September, and has returned to around a third of the levels before lockdown rules were introduced in March. Last week’s appeal from Johnson may have only halted further growth in people leaving their homes to work, instead of pushing numbers down, according to the report.

“This data suggests that a number of office-based companies and individuals have concluded that at least some portion of their work cannot be completed from home,” Michael Grant, chief operations officer at Metrikus, said in a statement.

The new work-from-home guidance was a reversal of Johnson’s efforts to reopen the economy after the first national lockdown sparked a recession. Over the summer, the government encouraged the public to go back to work, spend in shops and eat out in pubs and restaurants. But the resurgence of the virus has forced officials to halt these efforts and ramp up restrictions.