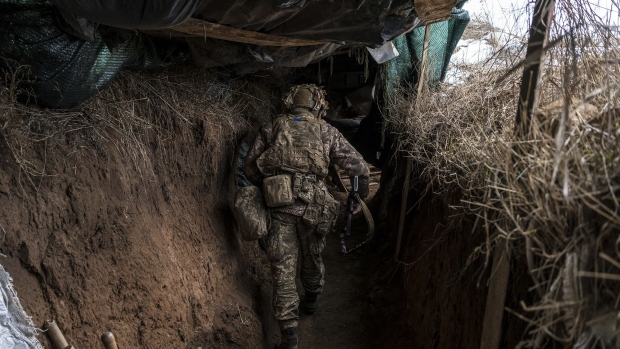 An Ukrainian soldier walks in a trench near the front line on January 17, 2022 in the village of New York, formerly known as Novhorodske, Ukraine. , Photographer: Brendan Hoffman/Getty Images

(Bloomberg) -- Officials at the U.K. Foreign Office have been told to be ready to move into “crisis mode” at very short notice, highlighting the increased concern that Russia’s aggression toward Ukraine could escalate into conflict, according to a person familiar with the matter.

Staff at the department were informed of the request this week, the person said. Triggering it would mean officials and diplomats are redeployed to work on Russia and Ukraine policy and to prioritize the U.K. response to any further spike in tensions, including deterrence and sanctions.

“This is critical work in shaping and securing our European neighborhood,” staff were told in a communication.

Some staff are already being shifted to work on contingency planning and strategic communications, the person said.

The Foreign, Commonwealth & Development Office did not respond immediately to a request for comment.

A “crisis mode” has been invoked in the recent past to deal with emergencies including repatriations related to the Covid-19 outbreak and the withdrawal of troops from Afghanistan last year to the response to blasts in Lebanon. The extent of the status is not set in stone and depends on the nature of the emergency.

It is also not an indication the U.K. government thinks an invasion is imminent or definitely happening, but part of putting precautionary plans in place that would shuffle staff to higher priority areas and allow the FCDO to move quickly if the status is triggered.

Defence Secretary Ben Wallace told the House of Commons on Monday that Russia’s mass deployment of troops close to the Ukrainian border -- equipped with tanks, armored fighting vehicles, rocket artillery, as well as short-range ballistic missiles -- was not routine.

President Vladimir Putin has denied he currently plans to invade Ukraine, but he is demanding security guarantees from NATO in return that the military alliance says it cannot give.

Wallace said the U.K. is sending light, anti-armor, defensive weapon systems to Ukraine, while a small number of British personnel will provide early-stage training for a short period. The aim of that assistance package is to help Ukraine increase its defensive capabilities, he said.