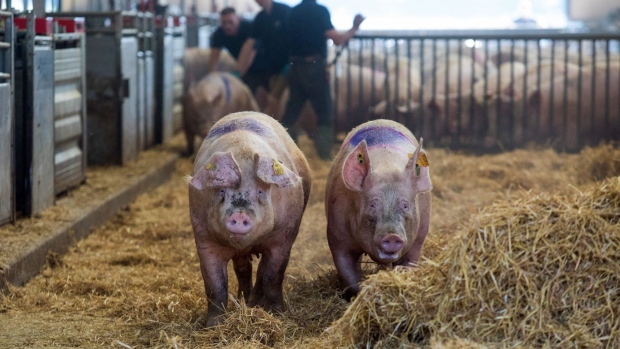 Sow pigs move between pens at a farm in Driffield, U.K., on Friday, July 31, 2020. The U.K.'s farming industry sends about two-thirds of its exports to the EU, which would be subject to steep tariffs under a no-deal Brexit. Photographer: Chris Ratcliffe/Bloomberg , Bloomberg

(Bloomberg) -- The U.K. opened applications for cold-storage aid for pork processors in a bid to ease a backlog of pigs, though farmers warned the measures may not go far enough.

Roughly 150,000 pigs have become stuck on British farms because of staff shortages, leading to animals being culled because there’s not enough room or it’s too costly to keep them. That’s prompted the government to turn to support measures, such as short-term visas for overseas butchers or storage aid to clear the queue of pigs.

The U.K. on Monday said the sector can apply for the state-funded private storage aid for as much as 14,000 tons. Yet the National Pig Association said the government measures could further hurt struggling farmers if they push pig prices lower, with the risk that slaughterhouses avoid “minimally” slaughtered pigs as they wait for overseas workers to arrive.

“Since the PSA has now been altered to allow the inclusion of boneless joints, we understand that some processors will not now use PSA until the butchers on temporary visas have arrived in the U.K., expected at some point in January,” NPA Chairman Rob Mutimer said in a statement. “This will enable them to use the resource to de-bone product and place it into storage until summer 2022, when there is expected to be a drop in supply.”

Under the private storage aid program, meat processors will be able to store slaughtered pigs for three to six months for processing at a later date to help clear the backlog at farms. So far, the NPA estimates that some 14,000 pigs have been culled.

The poultry industry has also been affected by labor shortages, with farmers appealing to the government to extend short-term visa issued to workers.

“The extra foreign workers have helped ease the labor crunch, but extending their visas by at least 18 months will give the industry some breathing space,” said Richard Griffiths, chief executive officer of the British Poultry Council.