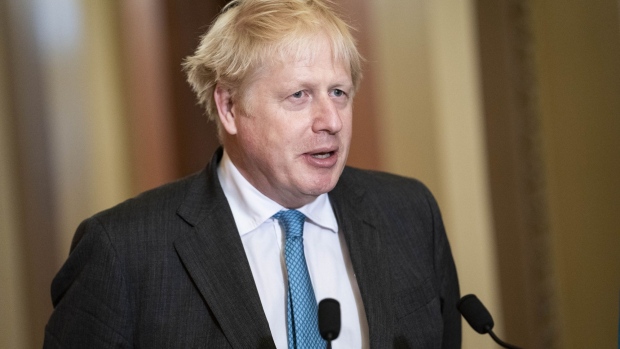 Boris Johnson, U.K. prime minister, speaks during a press conference with U.S. House Speaker Nancy Pelosi, a Democrat from California, at the U.S. Capitol in Washington, D.C., U.S., on Wednesday, Sept. 22, 2021. President Biden and the leaders of Australia and the U.K. celebrated their new defense pact in meetings on Tuesday, predicting an agreement that's angered France would nonetheless benefit the world. , Bloomberg

(Bloomberg) -- The U.K.’s main opposition party is gearing up for a potential general election as early as next year as strategists increasingly think Prime Minister Boris Johnson might go to the polls before voters feel the impact of higher taxes.

Labour leader Keir Starmer has been told by senior advisers that the party should be prepared for a snap election next spring, one senior party figure said on condition of anonymity.

It comes after Johnson announced a 1.25% tax rise on workers and businesses, which will come into effect next April, to help pay for the ailing National Health Service. He will also be under growing scrutiny next year when the public inquiry into the government’s handling of the coronavirus pandemic gets underway. Britain recorded the highest death toll in Western Europe.

The problem for the Labour Party is that it’s struggling to gain any ground on Johnson, despite a widening supply chain crisis because of a shortage of truck drivers since the U.K. left the European Union. Indeed, few at Labour’s annual conference in Brighton, southeast England, this week believe the party has a realistic chance of beating him.

Instead, Starmer’s efforts to win power are seen as a two-term project and he’s being encouraged by allies to stay on as leader if he loses, as long as some progress is made in winning seats.

Speculation around a snap election grew in Westminster this month when new Conservative Party co-Chairman Oliver Dowden told campaign headquarters to make sure they were ready. But government figures later played this down, telling The Times newspaper Johnson would more likely wait until 2024 when the next general election is officially due.

Whether Labour strategists are right may depend on Johnson’s fortunes over the next few months as the country heads into a difficult winter with empty supermarket shelves, lines at gasoline stations and a backlog at hospitals.