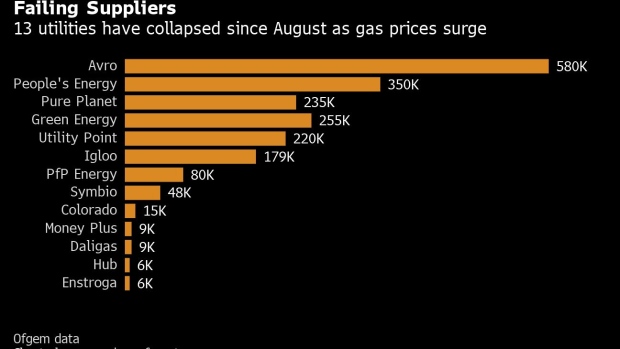 (Bloomberg) -- Setting up a gas or power supply company might sound complicated if you’re not in the energy business. In the U.K., though, all you needed was access to the internet and a package from a software company that even came with its own license from the regulator.

With no need for access to homes, a team of engineers or a company headquarters, the ease of entry explains why the number of suppliers in Britain ballooned to a peak of more than 70 in 2018. It also shows why the most open energy market of any major European economy is now convulsing.

Thirteen suppliers have collapsed in the past two months and there will likely be more to come as surging prices sink firms. The latest, Daligas Ltd., was registered to an address in suburban north London and had 9,000 customers.

The failures have forced 2 million people to transfer supplier. The cost of absorbing those customers already stands at about 2 billion pounds ($2.7 billion), which is shared out between firms and added onto bills under an agreement with regulator Ofgem. What the final tally will be as other companies fail is anyone’s guess, but it will be eye-watering for many households, according to energy market analysts.

“Meltdown in U.K. energy supply continues, mutualisation costs will rise, and there will be claims under the industry levy that will cost us all,” said Martin Young at Investec Plc. “Questions about market structure and regulatory oversight will no doubt intensify.”

The threat of soaring heating bills and emergency state intervention all adds to a malaise in Britain that stands out from its continental peers. Indeed, Prime Minister Boris Johnson and his government are firefighting on several fronts, many of which are of the country’s own making.

The U.K.’s departure from the European Union has led to a labor shortage that’s disrupted supply chains. The army was deployed this month to deliver fuel to gasoline stations because of a dearth of truckers. Food prices, meanwhile, are rising and charities have warned this winter will see the poorest people choosing between eating and heating.

When it comes to the energy supply market, there’s now the benefit of hindsight, according to Josh Buckland, a former government adviser and now a partner at consultancy Flint Global. He compared the lax checks and balances with those for banks during the global financial crisis in 2008: it’s only after the fact that the regulatory environment is being questioned.

“Competition has been good, it’s driven down consumer prices, but it has created a model of consistent consumer churn and short-term pricing to access new customers for growth,” Buckland said. “It’s created a situation where companies themselves aren’t financially stable.”

QuicktakeWhy U.K. Gas Suppliers Are Going Bust, and Who Pays

Here’s how it works. Once a company has a supply license, it can go and market itself online. The firm buys power and gas in the wholesale market, often through an intermediary, to supply to households. The energy is transported through infrastructure owned by grid companies and is metered at the point of use. Many incomers worked like aggressive starts-ups offering low priced tariffs — often at a loss — to encourage customers to sign up.

Business Secretary Kwasi Kwarteng remains confident that Ofgem’s existing procedures are working for now, according to a person familiar with the matter. They said the regulator has robust powers, and that suppliers going under are paying the price for not protecting themselves or their customers against volatile energy markets.

But it ultimately leaves British consumers now facing the cost. With gas and power prices near record highs, the total upfront burden for utilities to take on new customers is estimated at about 1,000 pounds per household. About 70-80% of that can be claimed back through an industry levy that is added onto energy bills, a person familiar with the procedure said.

The suppliers that have folded had customers numbering from 6,000 to 580,000, but even those backed by huge companies like BP Plc and Glencore Plc have struggled. With the collapse of Pure Planet, BP’s five-year experiment in the U.K.’s retail power business comes to an end. Royal Dutch Shell Plc is losing money at its supply business. Shares in the U.K.’s biggest supplier, Centrica Plc, keep rising as more rivals fall away.

The irony is that opening up the market was supposed to ensure consumers got a better deal from energy companies after a Competition and Markets Authority investigation found that customers overpaid by 1.4 billion pounds on their bills in the three years to 2015.

Attempts to increase competition by breaking up the so-called Big Six companies resulted in the introduction of a limit on the amount utilities could charge customers on default tariffs.

The current crisis has now put that in the spotlight. The government says it is protecting consumers from higher bills this winter while utilities say it’s crippling them because they have to supply energy at a loss.

How the price cap is calculated will likely need to change in future, according to Jonathan Brearley, Ofgem’s chief executive officer. The cap rose 12% on Oct. 1 and could increase a further 30% from April, according to industry consultant Cornwall Insight Ltd.

The cascade of failing suppliers hasn’t come out of the blue. Requirements to enter the market were lowered about a decade ago. Then, in 2018, the collapse of nine companies prompted the regulator to introduce new licensing requirements for new companies to demonstrate that they have “the funds and resources to manage their business for at least 12 months after entering the market.”

Now, if a big supplier fails, Ofgem will appoint an emergency administrator to limit the risk of market chaos created by trying to quickly transfer a large number of customers to another supplier. Ofgem, the Department for Business, Energy and Industrial Strategy and the Treasury may decide to financially prop up the supplier while another company is appointed to take on its customers.

“It is becoming clear that Ofgem and the government have built a system that was not designed to withstand this sort of market shock — the current energy crisis confirms that,” said Justina Miltienyte, energy policy expert at Uswitch.com, a website that helps people change providers for various services. “This situation should act as a wakeup call for Ofgem and government to completely review the regulatory regime.”