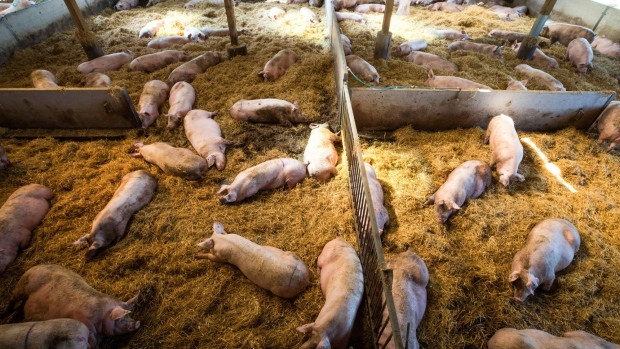 Sow pigs sit in pens at a farm in Driffield, U.K., on Friday, July 31, 2020. The U.K.'s farming industry sends about two-thirds of its exports to the EU, which would be subject to steep tariffs under a no-deal Brexit. Photographer: Chris Ratcliffe/Bloomberg , Bloomberg

(Bloomberg) -- Worker shortages at U.K. slaughterhouses have left farms with an even bigger backlog of pigs, prompting the industry to call for urgent talks with the government to ease the crisis.

Farms are now stuck with about 170,000 animals because of delays in being able to send them for slaughtering. The National Pig Association on Tuesday said it and the nation’s farm union wrote to Environment Secretary George Eustice and asked him to convene an urgent summit for the supply chain to “agree on a plan to get these pigs off farms and onto people’s plates.”

Staff shortages -- driven by Brexit and the pandemic -- have seen processors cut slaughter rates, causing the huge backlogs and forcing farmers to cull at least 35,000 healthy pigs, according to the NPA. Absent workers over the Christmas and New Year period worsened the problem, with less than half of contracted pigs being processed.

That’s bad news for farmers because of the financial burden of keeping pigs for longer, especially with high feed costs. They also face being penalized when processors take heavier pigs that they contracted farmers to supply at discounted prices.

The NPA also said that government measures to support the sector have so far had a “minimal benefit” for pig producers.