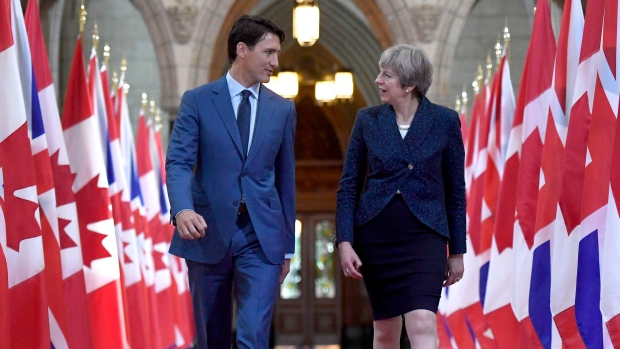 Prime Minister Justin Trudeau and British Prime Minister Theresa May walk in the Hall of Honour on Parliament Hill in Ottawa during a visit on Monday, Sept. 18, 2017. , The Canadian Press

OTTAWA -- Those feeling anxious about the future relationship between the United Kingdom and the rest of the world could use a little predictability, and both Prime Minister Justin Trudeau and British Prime Minister Theresa May say Canada can help.

The two countries are working towards a new bilateral free trade deal to take effect after the U.K. achieves its so-called Brexit from the European Union, the two world leaders revealed Monday after a morning of meetings in Ottawa.

What's more, they said, the template for that deal would be the long-heralded Comprehensive Economic Trade Agreement, or CETA, between Canada and the EU that comes largely into effect this week.

"There is no question that CETA, which eliminates well over 90 per cent of all barriers to trade between Canada and the European Union ... will make an excellent basis for ensuring a smooth transition in a post-Brexit world," Trudeau told a joint news conference.

"After that, there will obviously be opportunities for us to look at particular details that could be improved upon for the specific needs and opportunities in the bilateral relationship between the U.K. and Canada. 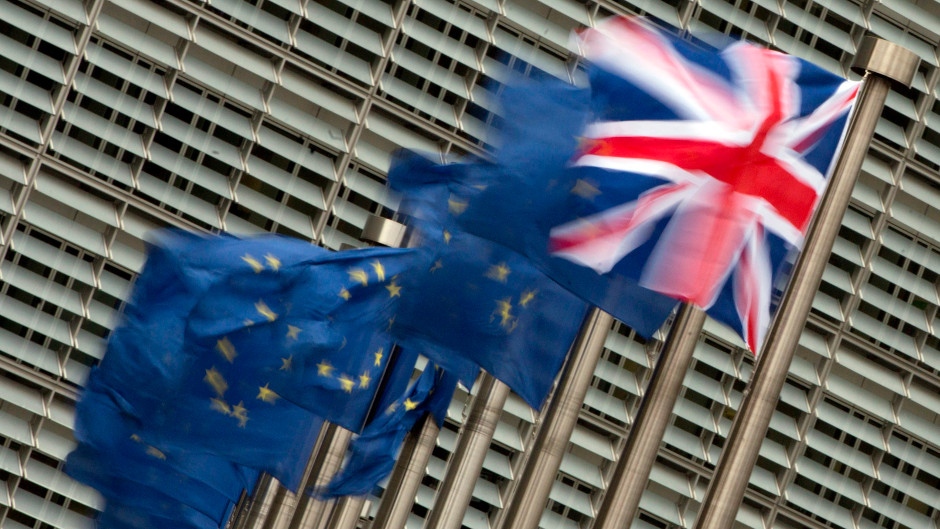 Do you think a bilateral trade agreement between Canada and the U.K. is a good idea?

The British prime minister agreed that using the Canada-EU agreement as the basis for a forthcoming new bilateral deal makes sense for everyone.

"We want to ensure that for businesses and individuals, that there is as smooth a changeover, when the United Kingdom leaves the European Union, as possible; we want to see as little disruption to economies and to people's lives," said May.

"That's why we believe it makes sense to take the trade agreement -- which the U.K. is part of, it's part of the European Union -- with Canada, and say that that is the basis at that point at which we leave for a bilateral relationship with the U.K. and Canada."

May said she has already discussed the approach with the European Union.

The Canada-EU trade deal took seven years to come together -- including some tense eleventh-hour negotiations with Wallonia, a tiny region of Belgium that ended up holding a deal-killing veto over the pact -- but Trudeau suggested things would move more quickly this time.

"Within the European Union, the U.K. is the largest trading partner that Canada has, so the U.K. was deeply involved throughout those negotiations towards CETA, obviously, over the past seven years," Trudeau said.

"It will form the basis for the way we move forward in a post-Brexit Europe."

May also spoke of working "swiftly."

The U.K. is Canada's fifth-largest merchandise trade partner, amounting to more than $25.3 billion in both directions last year.

The trade deal, however, was not the only headline-making development out of May's first official visit with Trudeau, who took the opportunity to ramp up his government's fight with U.S. aerospace giant Boeing.

The Liberal government, Trudeau said, won't do business with a company he accuses of attacking the domestic aerospace industry and trying to put people out of work.

May also has a stake in the dispute, as Bombardier has a factory in Northern Ireland.

The two leaders met Monday ahead of Trudeau's trip to New York to address the United Nations General Assembly, where May will also be speaking this week, including on ways to curb the use of the Internet by terrorists.