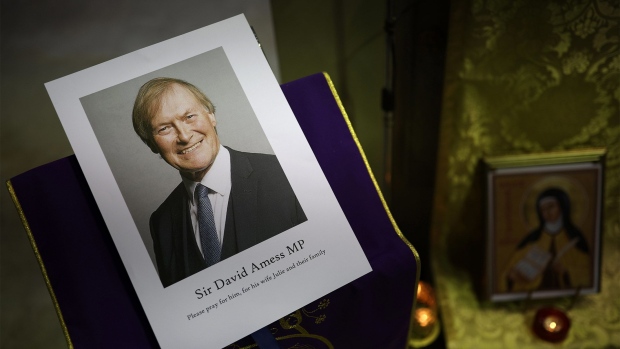 (Bloomberg) -- U.K. Home Secretary Priti Patel ordered a review of police security for members of Parliament after Conservative MP David Amess was fatally stabbed at a meeting in his constituency.

The attack revives questions about the safety of lawmakers meeting face-to-face with residents in their districts, usually with little security. A 25-year-old U.K. national was arrested on suspicion of murder and authorities are considering whether to classify the attack as a terrorist act.

“It will be for investigators to consider whether this has been a terrorist incident but they will, as always, keep an open mind,” Ben-Julian Harrington, chief constable of Essex Police, said on TV Friday.

It’s the second time in five years that a British MP has been murdered in public after Jo Cox was killed while attending such a so-called constituency surgery in 2016. Another Labour MP, Stephen Timms, suffered near-fatal injuries during a stabbing in 2010.

The events are held by most MPs in their constituency once a week, usually on a Friday, and allow residents to ask them to take up issues on their behalf.

“The Home Secretary has asked all police forces to review security arrangements for MPs with immediate effect and will provide updates in due course,” Kelsey Stubbs, a spokesperson for Patel, said in a statement.

In 2000, former Liberal Democrat MP Nigel Jones was attacked with a Samurai sword at his constituency office and his assistant Andrew Pennington died trying to defend him.

Veteran Labour MP and former foreign secretary Margaret Beckett called for a review and said she wasn’t sure if she’d return to doing in-person meetings with constituents.

“I will have to take advice about it,” she said on Times Radio on Friday. “I think we all should.”

MPs could be advised to limit meetings with constituents to Parliament, where visitors must pass through a metal detector. However, any moves to scale back direct meetings with voters may be greeted with dismay by some politicians who relish the opportunity for face-to-face meetings.

Amess, in his book “Ayes and Ears: A Survivor’s Guide to Westminster” published last year, wrote that increasing numbers of attacks on MPs in recent years had “rather spoilt the great British tradition of the people openly meeting their elected politicians.”

Police haven’t provided a motive for the attack on Amess, 69.

In the British political system, members of Parliament are elected to represent a local area and champion its cause. MPs work hard to gain prominence locally and constituency surgeries help them do so.

They also have teams of case workers who help constituents with the problems that they raise, either through correspondence or raising them at constituency meetings. These can range from complaints about potholes and school funding to requests for help in accessing welfare payments or navigating government bureaucracy.

Amess’s slaying follows the death of Conservative MP James Brokenshire from lung cancer last week. It means that two by-elections will be held in the coming months, in Amess’ seat of Southend West and Brokenshire’s seat of Old Bexley and Sidcup, both in southeast England.

With big Conservative majorities in both constituencies, Prime Minister Boris Johnson is unlikely to have trouble defending them, not least because opposition is likely to be muted in the tragic circumstances.

Party politics is likely to be put aside for some time, with lawmakers being more careful with rhetoric against their opponents.

Labour’s deputy leader Angela Rayner was criticized on Twitter for her tribute to Amess after calling Conservative ministers “scum” at an event at Labour’s annual conference last month.