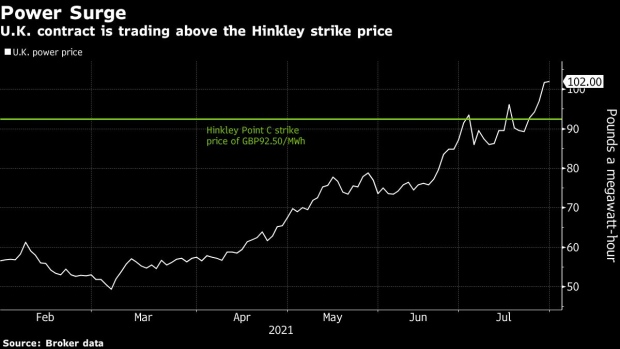 (Bloomberg) -- U.K. power prices have climbed so high that the cost of a new controversial nuclear plant, criticized for being too expensive, is now looking reasonable.

Wholesale electricity prices have pushed above 100 pounds ($139) per megawatt-hour for the first time since 2008. That’s higher than the guaranteed rate the government agreed Electricite de France SA would get for the power produced from the Hinkley Point C nuclear plant being built in southwest England.

The so-called strike price of 92.50 pounds set in 2013 was described by the National Audit Office as “high cost and risky in a changing energy marketplace.” The level was about double the wholesale market rate at the time.

Power prices are surging amid the soaring cost of natural gas, with concerns over low stockpiles and the lack of additional supplies pushing U.K. prices to the highest since 2005. Elevated prices are likely to extend into winter when colder weather starts to increase demand, according to RBC Europe Ltd.

Hinkley Point C isn’t due to come online until 2026 but the price guarantee for its power runs for 30 years. The mechanism, called contract-for-difference, is also used to subsidize offshore wind farms.

Under a CFD, developers agree a fixed price for future generation over a period of time. This gives certainty on future revenue that helps secure financing. If the market level is below the strike price, the generator will receive a top-up from the U.K. taxpayer. But on the flip side, the plant operator must pay back the difference if the market price is higher.

Electricity prices have long surpassed the government deals guaranteed to many wind farms. In the most recent auction in 2019, developers of offshore sites agreed to prices as low as 39.65 pounds a megawatt hour, adjusted for inflation.

By 2026, market rates are likely to be below the Hinkley Point strike price, according to Elchin Mammadov, analyst at Bloomberg Intelligence.

“People complain about the cost of Hinkley being too high,” Mammadov said. “Paying a premium for building the first U.K. European Pressurized Reactor is justified as we would use that experience to lower the cost of future nuclear projects.”

For Hinkley, the strike price in 2012 prices will be adjusted for inflation and will drop to 89.50 pounds if EDF takes a final investment decision on a second project at Sizewell on the southeast coast.