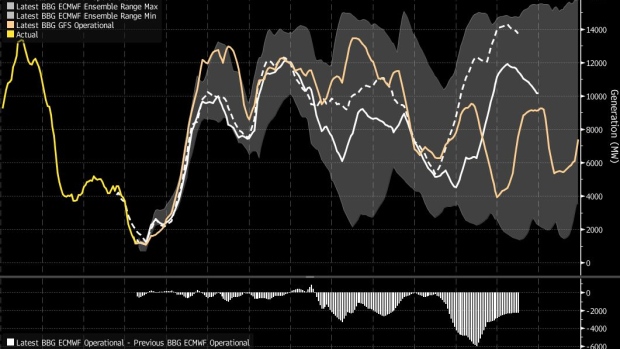 Onshore wind turbines and electricity transmission pylons on the Little Cheyne Court Wind Farm near Camber, U.K., on Monday, Oct. 26, 2020. The U.K.'s power supply buffer is set to shrink this winter compared to last year due to outages at power plants and the unexpected closure of two of Calon Energy Ltd.'s gas-fired stations after the company went into administration. , Bloomberg

(Bloomberg) -- Power prices in the U.K. soared to the second highest level on record on Monday as low wind levels exposed the market to a supply crunch.

Prices for between 5 p.m. and 6 p.m. rose to 2,000.01 pounds per megawatt-hour in the N2EX day-ahead auction for Monday, with wind power generation expected to meet less than a 10th of the demand for that hour. U.K. coal plants were operating at 1.5GW of capacity on Monday morning.

U.K. gas prices are more than three times as high as at the start of the year, as imports from Russia to Europe slowed, and periods with low wind will increase dependence on very expensive fossil fuel power. Hourly power price has only been higher on Sept. 15 when it rose above 2,500 pounds, and average price for Monday was the highest since Sept. 14.

“The power spot prices soared near 230€/MWh in northwestern Europe for today, lifted by forecasts of higher demand and weak wind and solar generation,” according to a note from EnergyScan.