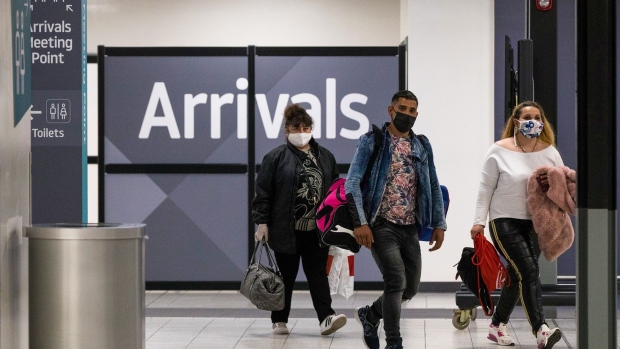 Travelers, wearing a protective face masks, pass through the arrivals area after landing at London Luton Airport in Luton, U.K., on Friday, May 1, 2020. Ryanair Holdings Plc will cut 3,000 jobs and said it will challenge some 30 billion euros ($33 billion) in state aid being doled out to save its European competitors. , Bloomberg

(Bloomberg) -- The U.K. is preparing travel restrictions to stop the spread of a new coronavirus variant from Brazil.

Prime Minister Boris Johnson faced calls to act on the new south American strain during a meeting with lawmakers in Parliament on Wednesday afternoon and on Thursday one of his ministers said protective measures are being readied.

Johnson’s team was criticized for being slow to introduce restrictions at the U.K. border during the first wave of the pandemic last spring. And a new plan for all arriving passengers to require a negative Covid test was due to come into force on Friday but has been delayed until Jan. 18.

“It takes a little bit of time,” government minister Victoria Atkins told Sky News when asked about curbs on south American flights. “Practical measures are being worked on at the moment.”

The U.K. is battling a surge in cases of the virus, which has so far killed 84,767 people. The government is constantly reviewing its lockdown measures but Johnson and his scientific adviser on Wednesday suggested the current rules are starting to work.

The government was due by Friday to impose a requirement for arrivals from anywhere in the world to show they have tested negative for the disease in the 72 hours before starting their journey. But Transport Secretary Grant Shapps said late on Wednesday the rule will now not come into force until next week.

The delay is “to give international arrivals time to prepare,” Shapps said on Twitter. Anyone without proof of a negative test will be fined 500 pounds ($683), he said.