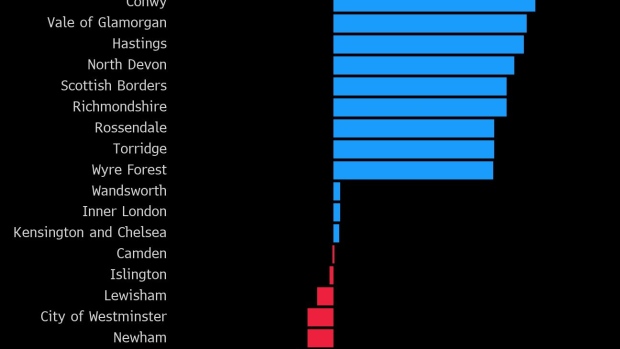 House prices in U.K. tourist hotspots surged during the pandemic, potentially contributing to the labor shortages facing the hospitality and leisure industries.

In an analysis published Tuesday, the Office for National Statistics said that property values in some rural and coastal areas increased at three times the national average in the year through July. That partly reflected demand for larger homes away from big urban centers as the five-day-a-week commute becomes a thing of the past for many office workers.

The increase is making property unaffordable for more people in many areas of the country where wages are below the national average. Conwy in North Wales saw a 25% jump in house prices over the past year, North Devon a 22.5% increase and Richmondshire in the Yorkshire Dales rose by 21.5%. The average gain across the U.K. was 8%.

“People living in rural and coastal areas -– particularly the young and those on lower incomes -– are at risk of being priced out of the housing market,” the ONS said. “This could be contributing to hospitality business being unable to fill vacancies, with the industry being predominant in tourist areas and containing a high proportion of young and low paid workers.”

The findings add to the post-pandemic challenges facing Prime Minister Boris Johnson’s government. While a tax break for homebuyers helped keep prices from falling during the recession, higher prices are exacerbating worker shortages that are now pushing up inflation, squeezing the finances of businesses and consumers. That’s contributed to a slowdown in economic growth in recent months.

The seven areas that recorded house price falls in the last year were all London boroughs. They include The City of London, City of Westminster and Camden.