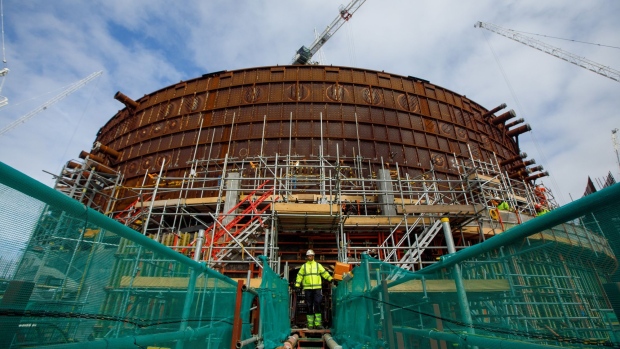 (Bloomberg) -- The U.K. government has proposed a bill to help boost investment in new nuclear power plants, a move that will help Britain cut its carbon emissions and that will be partly footed by consumers.

Britain will rely on a funding model previously used to pay for new airports and water projects, reducing its reliance on foreign capital, the government said in a statement. The so-called regulated asset base, or RAB, model is designed to encourage private-sector investment by diluting the construction risk shouldered by the taxpayer and developer.

Nuclear power is a key part of a strategy to maintain the supply of the low-carbon energy sources as the U.K. seeks to reach its net-zero target by the middle of the century. The bill would give a much needed boost to the nation’s aging fleet, with five of the U.K.’s eight nuclear plants set to be permanently halted by 2024.

Britain currently gets about 16% of its electricity from nuclear power stations and there’s currently only one new large plant under construction in the U.K., Electricite de France’s Hinkley Point C, that’s due to be finished in 2026. EDF’s 20 billion pound ($27.6 billion) Sizewell C plant in southeast England could be the first to benefit from the new funding model. The government had been exploring ways to remove state-owned China General Nuclear Power Corp. from the project.

The cost to consumers will be less than 1 pound per month on average through the construction phase of a project, the government said.