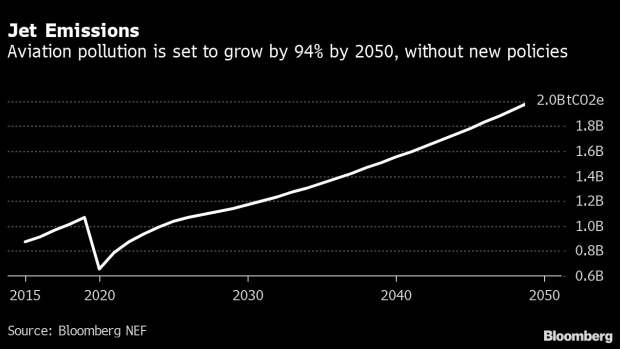 (Bloomberg) -- The U.K. is leading a push to get more countries to sign up to net-zero goals in aviation as part of the COP26 climate talks later this month.

The International Aviation Climate Ambition Coalition is a new group of countries aiming for emissions cuts in the industry, and will be launched in Glasgow, Scotland, according to an official program. COP26 President Alok Sharma said on Wednesday he hopes for more announcements on aviation at the summit.

The coalition will comprise states “that want to meet the challenge of net zero for aviation, and are encouraging all states to do the same,” the program says. It plans “an ambitious and comprehensive declaration on aviation emissions.”

The U.K. is leading the drive, according to people familiar with the situation. The effort would pave the way for the adoption of tougher carbon goals at the next International Civil Aviation Organization assembly in September 2022.

The airline industry’s chief global trade group, the International Air Transport Association, has already moved ahead, adopting a target of eliminating carbon emissions on a net basis by 2050 at its annual meeting earlier this month.

At its last assembly in 2019, ICAO reiterated a goal of 2% annual fuel-efficiency improvement through 2050 and carbon-neutral growth from 2020. States also requested ICAO study the feasibility and impact of setting long-term emissions goals.