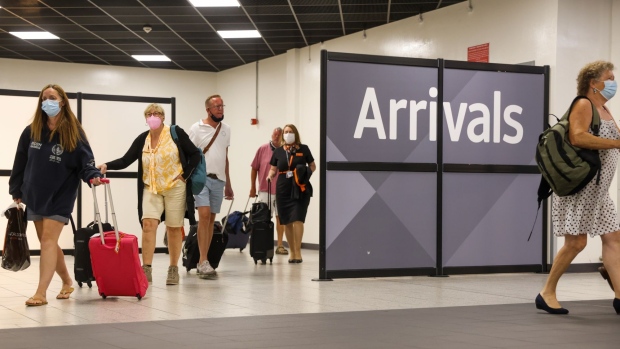 Passengers pass through the arrivals area at London Luton Airport in Luton, U.K., on Monday, July 19, 2021. While fully vaccinated tourists headed for the Mediterranean were cheered by the removal of quarantine requirements on their return, people bound for France hit out a decision late Friday that means they’ll still need to self-isolate. , Bloomberg

(Bloomberg) -- Transport Secretary Grant Shapps raised hopes that rules requiring travelers from France to self-isolate on arrival in the U.K. may be lifted as soon as next week.

The U.K. put France in a newly created “amber plus” category of its traffic-light quarantine system two weeks ago, meaning arriving passengers must isolate at home for up to 10 days and take two tests -- even if they’re vaccinated. Prime Minister Boris Johnson’s government said it was taking action due to the spread of the beta Covid-19 variant in France.

That sparked anger from airlines and tourism bodies because quarantine rules were being eased for most of Europe. This week ministers went further and said all fully vaccinated travelers from the United States and European Union can avoid isolation on return from Aug. 2 -- except for France.

Shapps said Friday the beta variant, which first emerged in South Africa, “looks like it might be trending downwards” in France. Government scientists will look at the latest data, with a decision to be announced at a regular three-week review of quarantine rules, he said. That is expected to be on Aug. 5.

“These things do move over a period of time,” Shapps told BBC Radio 4 when asked whether France’s status. “By this time next week we’ll know.”

France hit out at the U.K.’s position, with Europe minister Clement Beaune telling the broadcaster LCI on Thursday: “It is a decision which is not scientifically founded and which is discriminatory.”

The row was inflamed by apparent confusion within the British government over its rationale for isolating travelers from France.

Foreign Secretary Dominic Raab told the BBC this week the decision was based on the prevalence of the beta variant “in particular in the Reunion bit of France” -- despite that island being located in the Indian Ocean, more than 9,000 kilometers (5,600 miles) from mainland France.

But Shapps told Sky News the government’s assessment was not solely based on cases of the variant on Reunion, but also in northern France.