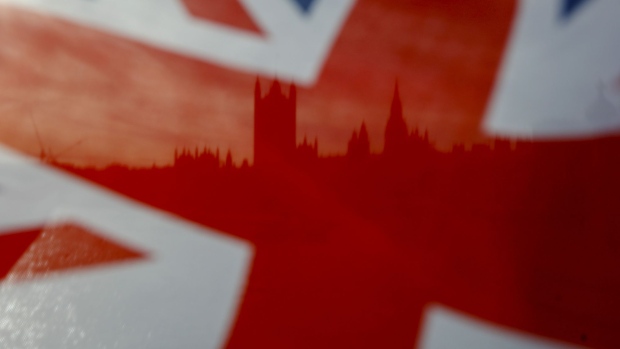 The Houses of Parliament stand behind a Union flag, also known as a Union Jack, in London, U.K., on Wednesday, Oct. 30, 2019. , Bloomberg

The U.K. had its credit rating downgraded by Moody’s Investors Service, which cited softer economic growth, an erosion of fiscal strength and a weakening in institutions andgovernance.

The company lowered the grade by one notch to Aa3 from Aa2, with a stable outlook. Moody’s had previously cut its outlook on the nation to negative in November.

The pound pared gains slightly against the dollar to about US$1.2914 after the announcement.

The coronavirus has blown a hole in the public finances, with the government spending tens of billions to support jobs and prop up an economy which has already suffered its biggest-ever quarterly contraction. The pandemic has pushed the national debt above 2 trillion pounds (US$2.6 trillion), or more than 100% of gross domestic product.

Chancellor of the Exchequer Rishi Sunak has spoken of a “sacred responsibility” to repair battered public finances, yet many economists and the International Monetary Fund are warning against a premature withdrawal of fiscal support at a time when much of the country is facing a fresh wave of restrictions to stem the virus. The material increase in debt poses risks to debt affordability in future years, Moody’s said.

The economy faces further stress as it nears the end of its transition out of the European Union. Prime Minister Boris Johnson said Friday that the U.K. will now get ready to leave the single market and customs union without a new free trade deal in place, blaming the bloc for refusing to offer good enough terms. He said he would always be willing to hear from the EU if the bloc’s leaders came back to the U.K. with “a fundamental change of approach.”

“Negative long-term structural dynamics have been exacerbated by the decision to leave the EU and by the UK’s subsequent inability to reach a trade deal with the EU that meaningfully replicates the benefits of EU membership,” Moody’s said.

Near-term, a no-deal Brexit could deliver a shock equivalent to about 1.5% of gross domestic product and leave the U.K. economy’s annual potential growth rate 0.2 percentage points lower in the future, according to Bloomberg Economics’ Dan Hanson.

Fitch Ratings downgraded the U.K. to AA- in March, citing the weakening of public finances caused by the impact of the COVID-19 outbreak. It’s currently rated AA, the third-highest investment grade, at S&P Global Ratings.