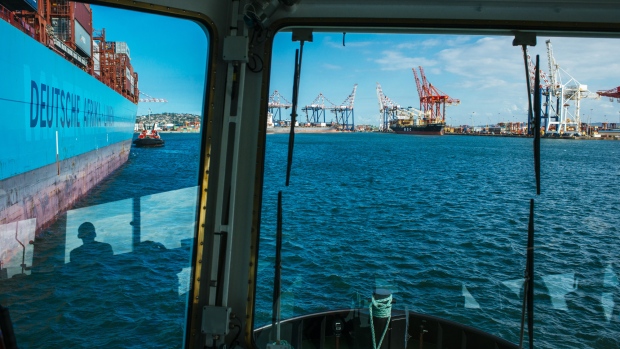 A ship-to-shore crane stands above shipping containers on the dockside at the Port of Durban, operated by Transnet SOC Holdings Ltd.'s Ports Authority, in Durban, South Africa, on Friday, May 25, 2018. Transnet last year reduced its seven-year capital-investment plan by 17 percent to 229.2 billion rand in response to lower-than-anticipated freight demand. , Photographer: Waldo Swiegers/Bloomberg

(Bloomberg) -- The five members of the Southern African Customs Union and Mozambique have reached a deal with the U.K. to govern trade between them after Brexit.

The new agreement mirrors the deal between those countries and the European Union and will come into effect if the U.K. leaves the bloc on Oct. 31, South African Trade and Industry Minister Ebrahim Patel told reporters Wednesday in Cape Town. The agreement will be submitted to South Africa’s cabinet for approval and then be ratified by parliament, he said.

SACU is the world’s oldest customs union and the four smaller members -- Botswana, Lesotho, Namibia and Eswatini -- derive between 30% and 40% of their government revenue from a customs-sharing pool that gains and falls on South African trade. Africa’s most-industrialized economy recorded its first quarterly trade deficit in more than a year in the three months through June, widening the current-account shortfall.

The fortunes of Lesotho, Namibia and Eswatini are also beholden to developments in their larger neighbor with their exchange rates pegged to the rand.

The U.K. is South Africa’s fourth-largest trading partner. Patel said he doesn’t foresee any fundamental change in trading conditions such as tariffs between southern African countries and the U.K. and EU after Brexit.

To contact the reporter on this story: Paul Vecchiatto in Cape Town at pvecchiatto@bloomberg.net

To contact the editors responsible for this story: Paul Richardson at pmrichardson@bloomberg.net, Rene Vollgraaff, Alastair Reed