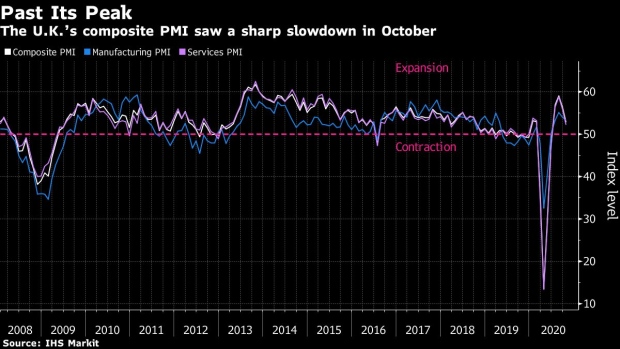 A U.K. government coronavirus advertisement at a bus stop in London, U.K., on Thursday, Oct. 22, 2020. Chancellor of the Exchequer Rishi Sunak announced a significant increase in U.K. government support for businesses hamstrung by the resurgent coronavirus, his third push in less than a month to stop a wave of job losses. Photographer: Simon Dawson/Bloomberg , Bloomberg

(Bloomberg) -- The U.K.’s recovery already looks well past its peak, putting the economy on a shaky footing as it enters a winter of stricter restrictions to control the coronavirus.

Growth saw a sharp slowdown in October, IHS Markit said in a report Friday, with a gauge for the nation’s dominant services industry dropping to a four-month low. A separate report showed consumer confidence declined the most since April.

Survey respondents flagged the impact of local lockdowns on general consumer spending -- a worrying sign for an area that’s was a standout performer as the economy emerged from lockdown. Retail sales had jumped a record 17.4% in the third quarter.

More bad news likely lies ahead, with large parts of the country now under curbs that ban household mixing in hospitality venues to slow a surge in virus cases. Those measures, coupled with the prospect of a messy divorce from the European Union at the end of the year, threaten to worsen a recovery from a recession that was the sharpest and deepest in three centuries.

In a sign of the worrying outlook, Chancellor of the Exchequer Rishi Sunak announced a significant increase in U.K. government support on Thursday, including more wage subsidies and grants for businesses. Meanwhile, several Bank of England policy makers say they stand ready to increase stimulus to support the economy. The next decision falls on Nov. 5.

IHS Markit said its composite gauge of activity slid to 52.9 this month from 56.5. The index is still in expansionary territory but nevertheless the worst since June. Services fell to 52.3.

A measure of new work declined, while business confidence dropped to the lowest since May, Markit said. The slowdown would have been worse without a boost from exports as overseas firms raced to secure orders before December’s Brexit deadline.

“The slower growth of output, the renewed fall in demand and further deterioration in the labour market suggest the economy started the fourth quarter on a weakened footing,” said Chris Williamson, Markit’s chief business economist. “While the fourth quarter still looks likely to see the economy expand, the rate of growth looks to have slowed sharply and the risk of a renewed downturn has risen.”