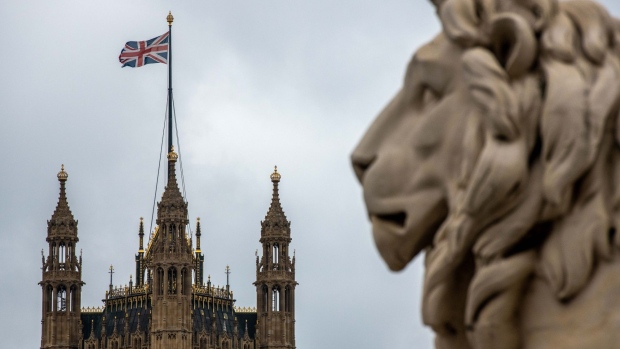 A statue of a Lion stands on Westminster Bridge in the view of the Houses of Parliament in London, U.K., on Tuesday, Oct. 13, 2020. U.K. Prime Minister Boris Johnson announced bars and pubs will be closed in the worst-hit parts of England from Wednesday to control a surge in coronavirus, but his top health adviser said it won’t be enough. , Bloomberg

(Bloomberg) -- The U.K. plans to amend the proposed National Security and Investment law to ease the burden on foreign companies seeking to buy stakes in British assets, amid fears more onerous legislation might deter investors.

Under a proposed government amendment, prospective overseas buyers of U.K. assets must notify the government if they’re seeking a stake of 25% of more, compared with 15% in the existing draft bill. It will be discussed when the legislation returns to the House of Lords for its report stage, starting April 15.

The bill announced last year will bring in sweeping powers for the government to intervene if takeovers are deemed a threat to national security. But with the new amendment, Business Secretary Kwasi Kwarteng is trying to strike balance to protect British assets without deterring foreign investment.

It comes as the government tries to steer the economy out of the U.K.’s worst recession in three centuries following the pandemic, while bolstering the case for investing in Britain after its departure from the European Union.

“This change will ensure the new regime is proportionate and as transparent as possible without reducing the government’s intervention powers,” the Department for Business, Energy & Industrial Strategy said in a statement.

The proposed legislation will overhaul rules dating back to 2002, covering sectors including defense, energy and transport as the government seeks to stop British companies, infrastructure and intellectual property falling into “hostile” ownership. It also aims to speed up the scrutiny process by imposing set time-frames within which ministers must come to a decision.

Under the original plans, the government estimated as many as 1,830 deals a year would be “notifiable,” meaning that prospective buyers had to notify a special unit in BEIS about their proposed transaction. The government expected to “call in” as many of 95 as those for closer scrutiny.

“The National Security and Investment Bill will strengthen the U.K.’s ability to investigate and intervene in mergers, acquisitions and other types of deals that could threaten our national security,” BEIS said. “The overwhelming majority of transactions will be unaffected by these new powers.”

The proposed changes mean fewer deals will be notifiable, though the department didn’t publish new estimates. The government will still have power to call in deals that don’t meet the 25% threshold if it believes the foreign acquirer would gain “material influence,” according to BEIS.