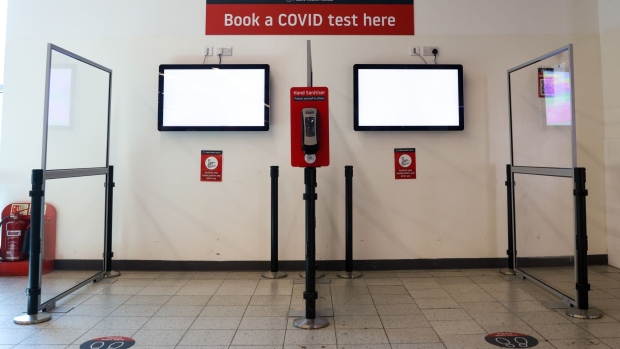 (Bloomberg) -- Early in the pandemic last year, London property developer Arnaud Touret bought a batch of 5,000 rapid Covid tests from South Korea. He set up a laboratory to analyze the results, hired a chief medical officer and applied for U.K. accreditation for his new venture.

His company, Covid Home Test U.K. Ltd., is now among more than 400 businesses listed on the government’s website offering PCR tests for travelers on their return. “There’s a gap that needs to be filled and the government is not filling the gap,” said Touret, 34. “We shouldn’t really exist.”

Testing has burgeoned into a cottage industry born out of the U.K.’s at times chaotic response to the coronavirus. But companies like Touret’s and health experts say the proliferation of more questionable firms now poses a risk to Britain’s ability to contain the next stage of the pandemic as it opens up the economy and allows more travel without quarantine.

While some other European countries have capped the cost of tests for travel, the British government is relying on the free market. Private companies are providing a service the state requires travelers to use, but critics say regulation is far too lax.

“The government has just opened up a complete Wild West,” said Tony Cooke, chief executive officer of Cambridge Clinical Laboratories, which offers Covid testing. “They’ve set up a gate system where you have to do certain things to pass through the gate, but once you’re inside you can do what you want because nobody’s checking up on you.”

People headed to and from the U.K. by air spent at least 380 million pounds ($520 million) on Covid tests in the first six months of the year, based on a Bloomberg analysis of passenger traffic data from the Civil Aviation Authority and London Heathrow airport.

Official figures haven’t been finalized, but the data point to about 6.3 million entries and exits during the period. The calculation assumes two tests per person, the minimum that most travelers require under U.K. regulations, at an average price of 60 pounds each.

Indeed, the cost can vary markedly: kits for tests on day two and eight of arrival range from 23.99 pounds to 575 pounds on the government website. Some customers have complained of never receiving their results, damaged test kits and nobody answering the phone or emails.

Willie Walsh, director general of the International Air Transport Association, has said some firms are advertising low prices that don’t actually exist when you click on their website. He told an event this month that “people are being ripped off and that the government in the U.K. is facilitating that rip-off.”

Ministers announced in December last year that all accreditation for private providers of coronavirus testing would be done through the U.K. Accreditation Service, or UKAS, to simplify the process for companies entering the market.

But the first two stages of accreditation are self-declarations and once approved, the company can get onto the official list of providers. Only then is there a physical assessment. Initially the UKAS said that must be completed within four months of stage two, though that was then extended to six months or Aug. 31.

That would allow a business to shut down at that point and reopen as another one, said Cooke. “It’s wide open to abuse,” he said. That’s exacerbated by the listing of companies in ascending price order on the government website, he added. Some firms are even creating fake companies with cheap prices to push competitors down the search list, according to consumer group Which?.

Ultimately, the risk is that if positive cases aren’t being recorded properly then it undermines the travel testing system designed to protect public health and prevent new strains of Covid-19 taking hold. Despite a vaccination program that’s seen about 70% of adults receive two doses, the government has already warned that infections could spike to 100,000 a day after England lifted restrictions on July 19.

A government spokesperson said testing firms were closely monitored. “If a provider is failing to meet the required standards set by government, they receive a five-day warning and can then be removed from the gov.uk list of test providers if they do not improve,” the person said.

Poor-quality testing companies are a concern for Denis Kinane, a professor of immunology and pathology and founder and chief medical officer of Cignpost Diagnostics. The company runs ExpressTest at Edinburgh Airport and charges 80 pounds for a PCR test for travelers using the Scottish hub, with results typically back the next day.

“The Department of Health and Social Care are trying to open up and encourage private testing,” said Kinane, 64. He said, though, the government has the market under control. “Our motivation from the start was to do the right thing and we have gone through everything we need to do with UKAS.”

At Covid Home Test U.K., Chief Medical Officer Ian Mann wrote to the department in June warning of problems in the system. He’s calling for the government to tighten the rules so that private testing firms need to obtain registration with England’s Care Quality Commission.

“The public implicitly takes the DHSC list of providers as having government approval,” Mann said in an interview. “Light-touch regulation was important and helpful in getting the industry off the ground quickly. Six to 12 months on, this needs to be reviewed.”

The dilemma for people seeking a vital travel test is that disreputable firms advertise prices that don’t actually exist, or set the delivery charge higher than the test itself, said Rory Boland, travel editor for Which? “People have huge trust in government websites,” Boland said, but many people were being sent off to “cowboy firms.”

The sheer number of different tests required for a holiday makes the problem worse as many people are baffled by the choice. Many countries require a “fit-to-fly” test before you get on the plane done within the previous 72 hours. Then you need a test in your destination before getting back on the plane, and another test two days after you return depending on the country.

Social media is awash with people who have missed trips and then paid hundreds of pounds to rebook.

One 29-year-old woman from Essex, southeast England, said her family missed their flight to the Canary island of Lanzarote after they paid for what were advertised as tests with results guaranteed in 24 hours. They were told they would arrive by midnight on Tuesday, but they didn’t come back in time for the 6:30 a.m. departure on Wednesday morning.

Felicity Harper, 39, from London, went to the Spanish Mediterranean island of Menorca this month with her husband and toddler to stay in a friend’s villa for four nights when it became available at short notice. She paid just 60 pounds for return flights but 350 pounds for tests, albeit including several she ordered by mistake not realizing they wouldn’t arrive before their departure.

“I was just trawling through the internet looking at reviews, looking at prices,” said Harper, who works in financial services. “The whole thing seems a little bit like a money-making exercise.”