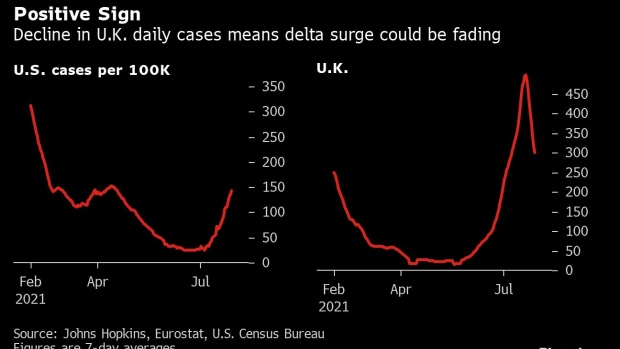 (Bloomberg) -- Two weeks ago, the delta variant was ripping through the U.K., stoking fears of a record wave of Covid-19 clobbering one of the world’s most highly vaccinated countries.

Then, almost overnight, daily cases plummeted, renewing hope that the pandemic’s end -- at least in some parts of the world -- is within sight.

Now, with the U.S. and much of the world grappling with delta’s fury, people are looking to the U.K. for answers about how their respective outbreaks might unfold. But there’s no single answer, as mutations and varied vaccination coverage create conditions for swings in virus rates. While experts agree on some factors in the U.K. story, they’re also struggling to make sense of what’s truly accounted for the sudden reversal and whether it’s really time to relax.

“This is a remarkably rapid decline and one that few anticipated,” said Martin McKee, professor of European Public Health at the London School of Hygiene and Tropical Medicine, who’s scrutinizing everything from the possibility that young people are skipping Covid tests to older people renewing their commitments to social distancing to the virus running up against a wall of immunity in the country. “Overall, it is a bit of a mystery.”

New daily cases in the U.K. reached almost 55,000 on July 17, before dropping back below 25,000 earlier this week. The situation shifts day to day, but the weekly trend certainly looks promising.

India, where the delta variant was first identified, has also seen a rapid fall in cases since they peaked at more than 400,000 a day in May. Now infections are running at about one-tenth of that level.

There’s consensus on one point: the high level of vaccinations in the U.K., where about 57% of the population has had both shots, has been a godsend. That’s higher than the European Union and the U.S., which are both closing in on the 50% threshold.

It’s also a primary reason why the level of hospitalizations and Covid deaths in the U.K. in recent weeks -- while still going up -- is nowhere near approaching the horrors of last winter.

According to David Matthews, a virologist at the University of Bristol, the highly transmissible delta mutation probably went out and infected almost everybody in the U.K. who hadn’t yet been vaccinated. But that won’t lead to the sort of “herd immunity” that many hoped would eventually prevent it from ever circulating.

“It’s more relevant to say herd immunity in the context of stopping people from being hospitalized and dying,” Matthews said. “We’re probably approaching that here in the U.K.”

Delta has centered on the younger population more than earlier variants, at least in terms of case numbers. That makes sense since few people under 18 are even allowed to get Covid shots in the U.K., while those in their 20s are among the least likely to roll up their sleeves.

During school term, students had to receive regular Covid tests, which captured lots of mild and unsymptomatic cases and helped fuel the so-called “pingdemic” -- in which tracing apps told millions of Britons who’d been in contact with infected people to quarantine.

So the fact that schools are closed for summer may be a key factor behind the recent drop in the number of reported cases.

“Younger people are less likely to test, especially if it means quarantining, staying at home, so many will probably ignore a sniffle, or a cough, or a cold,” said Ravindra Gupta, a professor of clinical microbiology at Cambridge’s Institute for Therapeutic Immunology and Infectious Diseases. “They may be going on holiday next week. And of course you get asked if you’ve had a positive test, and your hotel is not going to let you go if you did.”

The lower case numbers are particularly striking given some of the warnings made earlier in July. Neil Ferguson, an epidemiologist from Imperial College London whose modeling was key to the first lockdown, had said cases could rise to 100,000 a day. Health Secretary Sajid Javid issued a similar warning.

Gupta is urging officials to refrain from jumping to conclusions about the state of the pandemic. The level of danger won’t be clear until the fall, when schools are back and cooler weather sends people increasingly interacting indoors.

It will also take time to see the impact of the U.K. government’s efforts to re-open the economy, including the so-called “Freedom Day” on July 19. Still, many people remain cautious, with a survey published Friday showing that 95% of adults are still wearing face coverings outside of their homes and nearly two-thirds are social distancing.

Gupta’s team at Cambridge has been studying for months the genetic changes in delta and the implications for human health, and he’s particularly concerned about the threat it poses to some who have already been vaccinated -- perhaps a preview of what the world will come to worry about in the months ahead.

Its ease of replication means people are probably capable of spreading it earlier in their infections than with previous variants, accelerating chains of transmission and helping account for the shockingly steep spike in cases seen recently.

Antibody levels also need to be higher in order to prevent infection from delta, according to Gupta. The fact that antibodies fall may not be a major problem for most people with healthy immune systems, but it could prove dangerous or even fatal for some elderly or otherwise at-risk groups.

For now, it’s crucial that countries vaccinate as many people as possible to limit the chances for new variants to emerge -- perhaps a version of delta that’s even better at infecting the vaccinated -- and to reduce the chances of Covid patients unnecessarily filling up emergency rooms again. That’s only becoming more essential as it’s evident that the coronavirus is here to stay.