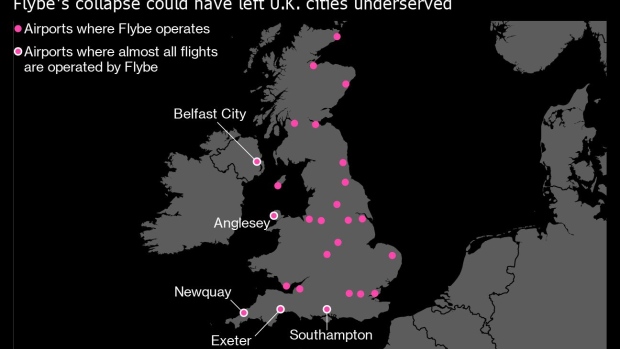 (Bloomberg) -- U.K. carrier Flybe’s struggle for survival has highlighted a key issue facing countries as they move toward more sustainable forms of transport: very often the alternatives to aviation just aren’t there.

The collapse of Britain’s biggest domestic carrier would have cut carbon emissions at a stroke. But faced with a lack of viable rail links to the often far-flung cities Flybe serves, the government instead hatched a rescue plan involving a review of aviation tax and a possible state-backed loan.

Caroline Lucas, Britain’s only Green Party lawmaker, said the intervention was “utterly inconsistent” with combating climate change, and that the state should let high-carbon industries wither. Molly Scott Catto, who represents the U.K. Greens in the European Parliament, said the government was putting the “convenience of today’s elite travelers” ahead of future generations.

Prime Minister Boris Johnson, though, said before the rescue that Flybe played a key role in delivering connectivity across the U.K., while acknowledging that Britain lacks sufficient infrastructure “in many parts of our country.” The government also affirmed a commitment to net zero carbon emissions by 2050.

Journeys from Birmingham in central England to Inverness in the Scottish Highlands or the Welsh capital Cardiff to the oil city of Aberdeen would take hours longer and cost far more by train, even traveling on some of Britain’s faster lines. And the loss of Flybe routes from Belfast City airport in Northern Ireland could even mean some passengers traveling partly by ferry.

The intervention contrasts with the government’s stance on the collapse of Thomas Cook Group Plc in September and Monarch Airlines in 2017, both focused on the tourism market and deemed less vital to the U.K. economy.

Letting Flybe fail without a viable rail alternative could also have pushed more people into their cars, generally more energy efficient than the plane only if each vehicle has multiple occupants, according to EcoPassenger, a website that compares the environmental impact of different modes of transport.

Still, Flybe parent Connect Airways -- owned by Virgin Atlantic Airways Ltd. and partners Cyrus Capital and Stobart Group -- has itself acknowledged that the writing may be on the wall for some of its services.

Chief Executive Officer Mark Anderson said in October there are routes the carrier might no longer serve amid the spread of so-called flight shaming and campaigning against unnecessary flights. Shorter Flybe trips with an adequate rail alternative include Manchester to Glasgow and Exeter to London.

To contact the editors responsible for this story: Kenneth Wong at kwong11@bloomberg.net, Christopher Jasper