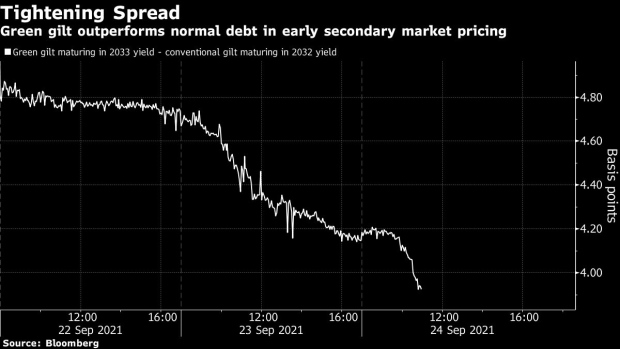 British Union flags, also known as Union Jacks, fly against a backdrop of offshore wind turbines off the coast in Clacton On Sea, U.K., on Tuesday, Oct. 6, 2020. U.K. Prime Minister Boris Johnson committed to boosting U.K. offshore wind power as part of his delayed plan for a "green industrial revolution" as he seeks to get his stalled domestic agenda back on course. , Photographer: Bloomberg/Bloomberg

The U.K.’s largest company pension fund didn’t buy into the nation’s debut green bond as it balked at the expensive price relative to normal debt.

BT Pension Scheme, which manages about 58 billion pounds ($80 billion), was not comfortable with the pricing on Tuesday’s sale, which bookrunner HSBC Holdings Plc said had the largest “greenium” of any high-grade sovereign issue. The deal still broke demand records for both gilts and the global green bond market.

“Our finger was hovering over the mouse and we were looking at it with a lot of interest, but it just didn’t happen,” said Victoria Barron, BTPS’s head of sustainable investment, in an interview. “It’s really important for everyone to think very carefully about going into some really expensive bonds at the risk of not getting the fair value that you should be.”

The comments speak to an inherent tension between investors and issuers as most green bonds continue to get sold with lower yields than conventional debt, despite a boom in supply this year. With 25% of Europe’s debt sales now with an ethical label, analysts are watching if this greenium starts to fade as investors become more choosy.

So far the new green gilt is outperforming conventional debt. RBC Europe’s Gordon Aitken said demand should be buoyed by new regulations coming into force next month that will require large U.K. pension funds to consider sustainability and climate change. For BTPS, though, buying green can’t come at any cost.

It hasn’t ruled itself out of future green gilt sales -- with the U.K. planning a second next month that its debt chief hopes will appeal to pension funds -- depending on pricing.

“We really would have liked to have bought them,” Barron said. “The government has a really big pool of capital that can be unlocked with institutional investors. Any more dialogue that can happen would be excellent and very much encouraged.”