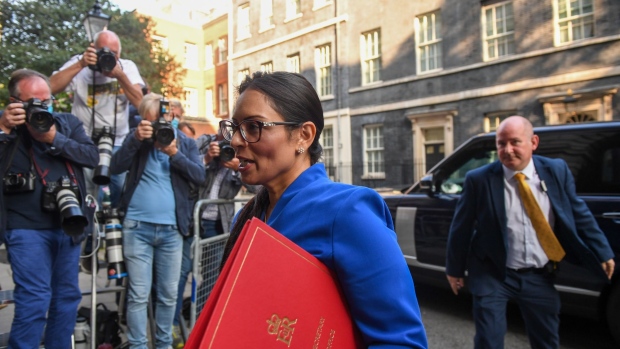 Priti Patel, U.K. home secretary, arrives for a meeting of cabinet ministers in London, U.K., on Tuesday, Sept. 15, 2020. U.K. Prime Minister Boris Johnson's plan to renege on part of the Brexit divorce deal passed its first hurdle in Parliament late Monday after a bruising debate in which senior members of his own party denounced the move. , Bloomberg

Johnson is considering the move because Patel has been unable to control the flow of asylum seekers into the country, according to the report. On Friday, the prime minister overruled an inquiry’s findings that Patel had broken the ministerial behavior code by bullying civil servants.

Kit Malthouse, the policing minister, is tipped to take over Patel’s job, the Times says. Michael Gove and Dominic Raab are also in consideration. Patel is expected to become party chairwoman.