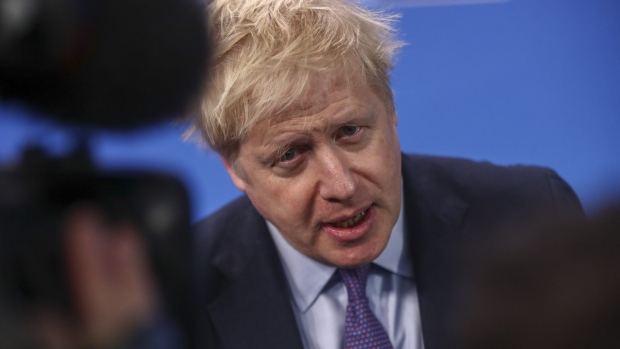 Boris Johnson, U.K. prime minister, speaks to the media as he arrives for a North Atlantic Treaty Organisation (NATO) Leaders' meeting at the Grove Hotel near Watford, U.K., on Wednesday, Dec. 4, 2019. , Bloomberg

British Prime Minister Boris Johnson still has a high temperature and remains in isolation, one week after testing positive for coronavirus.

Johnson made the announcement in a video posted on Twitter on Friday, saying that even after seven days, “alas I still have one of the symptoms, a minor symptom: I still have a temperature. In accordance with government advice I must continue my self-isolation.”

With deaths still rising because of the pandemic the premier is anxious to drum home his message that Britons must obey government orders to stay in their homes as much as possible. On March 23 he ordered a full national lockdown, with the closure of schools, stores restaurants and leisure facilities. Police will fine individuals who flout the rules and break up gatherings of more than two people in public.

Johnson’s health advisers have pointed to “green shoots” suggesting the country may be turning the corner, but they still expect the death toll to rise sharply in coming days.

Johnson, 55, felt unwell on March 26 and took a test forthe virus, which confirmed he had the illness. The following day he announced he was in isolation.

The premier appeared on his doorstep on Thursday night to join in a mass nationwide round of applause in support of state healthcare workers. With good weather forecast for the weekend, Johnson used his video on Friday to reiterate his demand that people stay at home, even if they and their children were feeling “stir crazy.”

“There may be just a temptation to get out there, hang out and start to break the regulations,” Johnson said. “I just urge you not to do that. Please, please stick with the guidance now.”