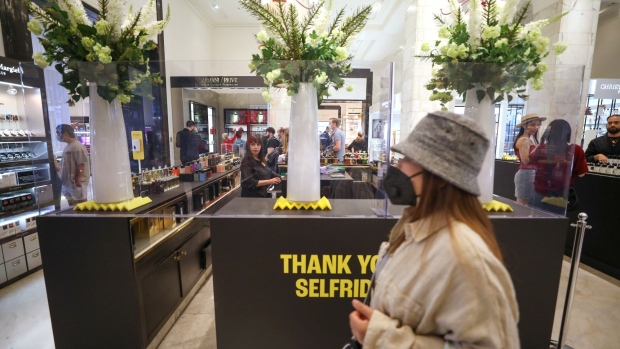 A shopper wearing a protective face mask passes a perfume counter surrounded by a protective screen in Selfridges & Co Ltd. department store in London, U.K., on Monday, June 15, 2020. British Prime Minister Boris Johnson encouraged consumers to go out and "shop with confidence" when stores reopen in England on Monday, as he suggested social distancing rules will be eased. Photographer: Chris Ratcliffe/Bloomberg , Bloomberg

Prime Minister Boris Johnson said the U.K. must be “vigilant” about the threat of a resurgence in COVID-19 across Europe after his government warned more restrictions on travel could be imposed.

Ministers have already advised Britons against all non-essential trips to Spain and ordered arrivals from Spanish airports to quarantine for 14 days amid fears of a spike in cases.

Spanish Prime Minister Pedro Sanchez described Johnson’s blanket rule, which takes in areas of the country with low levels of the disease as well as hotspots, as “unbalanced.” British officials insist the measures are necessary to combat the spread of the virus.

On Monday, Johnson’s office warned further restrictions on travel to other European destinations may be required, a message the premier reinforced when discussing U.K. measures to tackle the pandemic on Tuesday.

“Clearly we now face, I’m afraid, the threat of a second wave in other parts of Europe and we just have to be vigilant and we have to be very mindful,” Johnson told reporters near Nottingham, central England. “The most important thing is for everybody in all communities to heed the advice, to follow the advice, not to be spreading it accidentally and get it right down, and we’ll be able to ease the restrictions across the country.”