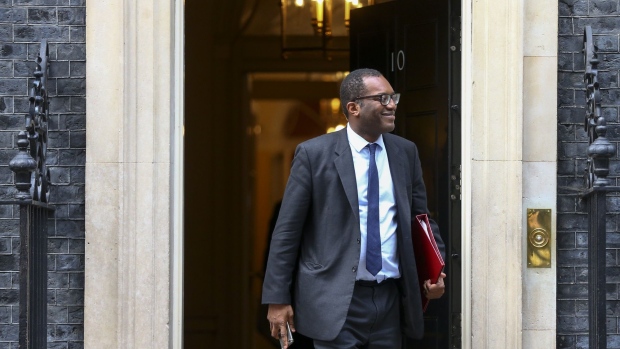 Kwasi Kwarteng, U.K. business minister, departs from a meeting of cabinet ministers at number 10 Downing Street in London, U.K., on Wednesday, Oct. 16, 2019. Democratic Unionist Party Leader Arlene Foster dismissed as "nonsense" a report it was close to dropping its opposition to Boris Johnson's latest Brexit deal and opening the way to a historic agreement with European Union leaders this week. , Bloomberg

(Bloomberg) -- U.K. Business Secretary Kwasi Kwarteng said he could become vegan to help combat climate change and hinted that laws may not be needed to get British citizens to reduce their meat consumption, because they’re doing it anyway.

The government this week announced an ambitious new target to cut greenhouse gas pollution by over three quarters compared to 1990 levels, by 2035, which will require people to eat less meat and switch their home heating source away from gas.

“I’m certainly reducing my meat consumption, not only for environmental reasons but also for health reasons,” Kwarteng said in an interview with Bloomberg TV. “I’m eating a lot more fish than I ever did before and maybe I can move to a full vegan diet at some point.” He also said he drives a hybrid car and would move to a fully electric model.

Food production is responsible for a quarter of the world’s greenhouse gas emissions, most of which come from meat and dairy livestock.

The U.K.’s independent Climate Change Committee called for policies to encourage a cut in eating of meat and dairy, saying that meat consumption needs to fall by 35% compared to today’s levels in its central scenario. A study in the Lancet medical journal last year showed getting more people to cut down on beef could save lives by reducing heart attacks and curbing global temperature rises.

But the government has said it’s keen to allow people to have a choice over what they eat. Kwarteng hinted Whitehall wouldn’t intervene to reduce meat eating.

“A lot of the change is happening by society anyway. If you look at lots of people’s diets we are consuming a lot less meat than we have done in the recent past. More people are adopting vegan and vegetarian lifestyles and this is happening through social action. This is happening through people acting as individuals and in communities. It’s not been driven by government legislation,” he said.