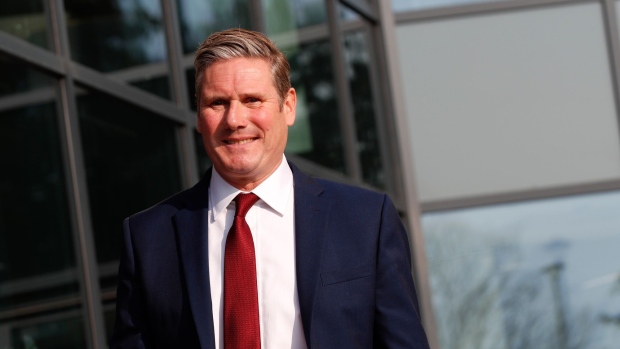 Keir Starmer, leader of the opposition Labour Party, departs after delivering his keynote speech on the final day of the party's online conference ‘Connected’ from the Danum Gallery, Library and Museum in Doncaster, U.K., on Tuesday, Sept. 22, 2020. The U.K. Labour Party is polling level with Prime Minister Boris Johnson’s Conservatives for the first time since he took office in 2019, The Times of London reported. , Bloomberg

The leader of the U.K.’s opposition Labour Party wants to overhaul the rules on electing his successor and ditch the system that saw Jeremy Corbyn storm to victory before losing two general elections.

Keir Starmer told his shadow cabinet on Tuesday that he plans to return to parliamentarians, party members and trade unions each having a third of votes rather than the current “one member, one vote” policy. The move was met with fury from the left of the party.

Corbyn said on Twitter it would be “deeply undemocratic,” while campaign group Momentum said it risked “the start of a civil war in the party.” The Unite union, Labour’s biggest donor, also voiced opposition. General Secretary Sharon Graham called it “unfair, undemocratic and a backwards step.”

Labour will hold its annual conference in Brighton starting at the weekend, Starmer’s first major in-person gathering since he was elected leader in April 2020. While Conservative Prime Minister Boris Johnson faces battles over food shortages, surging energy prices and the coronavirus crisis, Starmer is aiming to present himself as a credible premier-in-waiting.

The rules on party leadership were changed by Ed Miliband when he was leader in 2014. People were also allowed to pay a fee of 3 pounds ($4.10) to become “registered supporters.” That all led to a tidal wave of support for veteran left-wing candidate Corbyn, who stunned Westminster by winning a landslide in the 2015 contest. He went on to a narrow defeat in a U.K. election two years later before being trounced by Johnson in 2019.

Starmer said the rules need to change “if we are serious about winning the next election.” He also plans to overhaul the way Labour comes up with policies to avoid an “endless series of motions at party conference”, according to the person familiar with the plan. That could anger the left of the party further as it could deny members a vote on the proposals next week.