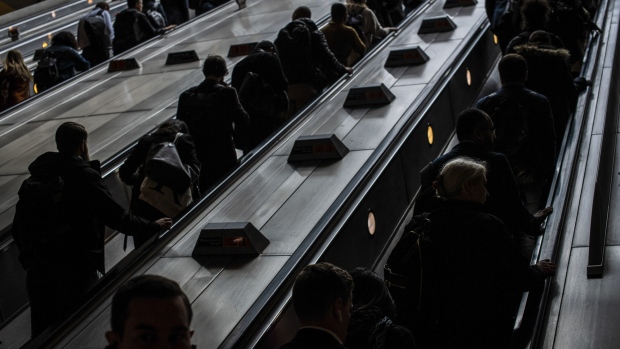 Commuters exit the Canary Wharf London Underground station at the Canary Wharf financial, shopping and business district in London, U.K., on Thursday, June 13, 2019. "My frustration is the government thinking the way to make our country more equal is to make London poorer," London Mayor Sadiq Khan said in an interview Monday. , Bloomberg

(Bloomberg) -- If there is one thing that businesses hate it’s France’s 35-hour work week. Now the U.K.’s main opposition has proposed an even shorter one.

At its annual conference this week, the Labour Party presented a suite of policies that pushed its economic approach in an even more socialist direction. While drawing applause from the rank and file, it does little to ease concerns that a Jeremy Corbyn-led government is more alarming to U.K. Plc than Brexit itself.

The four-day week is the one causing the most head-scratching.

“Who would turn down a four day week on the same pay?” said Carolyn Fairbairn, head of the Confederation of British Industry. “But without productivity gains it would push many businesses into loss.”

For a prime example of how forcibly regulating hours can cause a headache, look no further than France, where a 35-hour work-week was introduced almost 20 years ago by the Socialist government of Lionel Jospin. The nation has since struggled on and off with the issue, adding further complications to an already complex labor code.

The aim was to create more jobs -- in theory by sharing out work among more people -- and to boost productivity, a problem that also plagues the U.K. economy. Workers would also get more leisure time, thanks in part to extra days of vacation to compensate for working over 35 hours a week.

Economists still bicker about whether the change met its aims or not. It’s hard to attribute job creations to the measure alone as payroll taxes declined at the same time, and France’s loss of competitiveness since can also be apportioned to other factors, including Germany’s labor reforms.

Political disagreements are even more acute, especially at elections when rival parties concoct different ways to circumvent or defend the “35 heures.” The left typically holds up the measure as a totem of their achievements in government, while the right has repeatedly promised to dismantle the limit on working hours and blamed it for a host of France’s ills.

Current President Emmanuel Macron has opted to tread carefully around the issue. Before being elected, he repeatedly criticized the “35 heures,” but softened his attacks once officially on the campaign trail. The labor reforms he introduced shortly after taking office give companies greater latitude to negotiate workarounds with their employees, but it’s complex and the legal limit remains 35 hours.

The crux of the matter is that once introduced, it’s hard to get rid of.

To contact the reporters on this story: Jessica Shankleman in Brighton, England at jshankleman@bloomberg.net;William Horobin in Paris at whorobin@bloomberg.net

To contact the editors responsible for this story: Flavia Krause-Jackson at fjackson@bloomberg.net, ;Rosalind Mathieson at rmathieson3@bloomberg.net, David Goodman