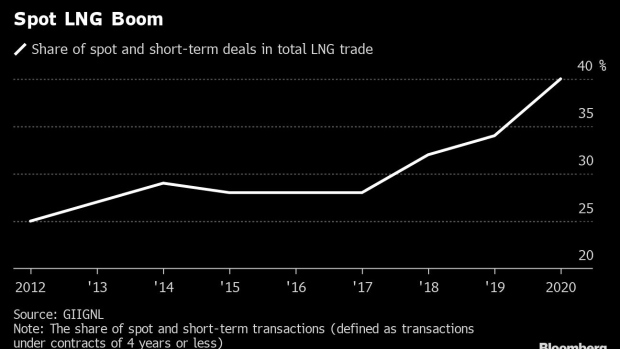 (Bloomberg) -- As U.K. Business Secretary Kwasi Kwarteng addressed parliament Monday on the energy crunch facing households, he left a key question unanswered: how will Britain secure enough gas this winter without paying the sky-high prices that have put multiple companies on the ropes?

At the crux of the problem is a lack of sites to stockpile the fuel, following the U.K.’s decision to close its biggest storage facility -- accounting for about 70% of capacity -- back in 2017. That’s left it reliant on the vagaries of the world market, competing with top buyer Asia for every molecule of liquefied natural gas offered for sale.

While the U.K.’s supply squeeze is particularly acute, Europe as a whole is suffering from insufficient inventories just weeks before the heating season starts. This predicament has been years in the making, with the region winding down its own gas output and boosting reliance on Russia and on intermittent wind and solar power. With those sources falling short this summer, and demand rising as economies emerge from the pandemic, prices have soared.

“We need storage; the U.K. gave up its storage and north Europe is only 70% full,” said Marco Alvera, chief executive officer of Italian energy infrastructure company Snam SpA. “If I were a policy maker, I would find every incentive to either force or incentivize or ask people to fill up existing storages.”

Centrica Plc, the U.K.’s biggest utility, announced the shutdown of its Rough storage facility off northeast England in 2017 after three decades of operation. That reduced Britain’s buffer against price moves and left it at the mercy of global markets.

“The government could have acted to keep it open, but did nothing,” said Ed Miliband, the opposition Labour Party’s business and energy secretary.

Kwarteng acknowledged that the lack of gas storage is “definitely an issue.” Still, he stressed there were no concerns about blackouts this winter and said the U.K. gas system is expected to function effectively, with 50% of supplies coming from domestic production and a further 30% from Norway.

The country has “more than sufficient capacity to meet demand,” he said. “We do not expect supply emergencies to occur this winter.”

So far, the market isn’t convinced. As Kwarteng finished his speech on Monday, U.K. gas prices closed up 16% at 189.65 pence a therm, the highest settlement on record. Futures have more than tripled this year, with summer prices in many cases trading near the same levels as winter. Rocketing wholesale costs have seen several small energy suppliers go out of business in recent weeks.

When Centrica closed Rough, no other storage facilities were built. With storage profits low for years amid an oversupply, companies had no incentive to get new projects off the ground.

“All governments rejected the chance to do something about this during the 2000s, early 2010s, when there were lots of storage projects that needed funding,” said Jonathan Stern, a distinguished research fellow at the Oxford Institute for Energy Studies. “They decided to ‘leave it to the market.’ Last year that was a great decision with huge supply, low demand and record-low prices; this year, not so good.”

The U.K.’s insufficient storage means it’s fighting for LNG cargoes on the global market. And with countries from Japan to India panic-buying to secure supplies before the winter, very little is left for Britain. The U.K. also lacks the long-term LNG contracts that oblige sellers to deliver, leaving it reliant on the roughly 40% of supplies that trade freely on the spot market.

Rough’s shutdown has limited the U.K.’s ability to get its hands on LNG cargoes, according to Alex Froley, head of LNG at data provider ICIS. Britain received just three cargoes from July to September, while some 13 discharged at the Gate terminal in the Netherlands, he said.

“An important part of summer gas demand is for storage injections, so it may be easier to send cargoes direct to countries with major seasonal storage sites, such as the Netherlands and Germany, rather than to the U.K.,” he said.

And then there’s Brexit.

The U.K.’s departure from the European Union has stoked concerns over winter supplies, since countries across the region can sometimes stop exporting gas and electricity if there are risks of blackouts. The fear is that nations in the 27-member bloc will choose to cut off Britain first.

“We effectively have no gas storage, which makes us vulnerable and we just left the EU,” said Niall Trimble, managing director of consultants Energy Contract Co. “This is one of the side-effects of Brexit: we’ve become more vulnerable on energy security.”