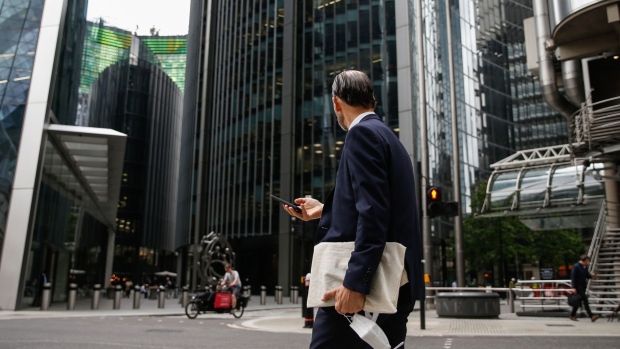 A social distancing sign in the foyer of an office building in London, on July 15. Photographer: Hollie Adams/Bloomberg , Bloomberg

(Bloomberg) -- On Monday, England’s white-collar workers will be free from government guidance telling them to work from home. Few executives are planning for a stampede of staff back to long-neglected desks.

In the City of London, even banks that have been relatively vocal in their support for a widespread return to the office aren’t planning for a return to normal anytime soon. Facemasks and rotational schedules will remain at JPMorgan Chase & Co. as it maintains a 50% occupancy limit at its offices in England.

Bank of America Corp. is expecting just a few hundred more staff to return out of a total London employee base of 4,500. Deutsche Bank AG is gradually encouraging more employees to spend more time in the office over the summer on a voluntary basis.That cautious approach is being replicated by businesses across the U.K. as a surge in cases and the requirement to self-isolate for those who cross paths with a person who has tested positive for Covid-19 feeds nerves among even vaccinated employees about any return. With little guidance from the government on masks or occupancy levels, most companies looking to boost in-person attendance are now waiting for the end of the summer.

Even September may underwhelm with plenty of firms planning for entirely different working arrangements. Revolut Ltd. announced back in February that they would stick with permanent flexible working. The fintech’s Canary Wharf offices are to be redesigned and repurposed as flexible collaboration spaces.

“I don’t think we really see “return to the office day” as a big event in our London office,” a spokesperson for Revolut said.

PPG Industries Inc., the world’s largest paint and coatings company, will continue to offer flexible work arrangements, including to its 2,400 employees in the U.K. “It’s hard to argue that working from home hasn’t worked out,” Chief Executive Officer Michael McGarry said of the company’s thinking with regard to reopening.

Even those splashing out on new offices aren’t racing back to their desks. Arcadis NV, the engineering firm that opened a new City of London office on June 14, will increase its workplace capacity from 60 to 100 on July 19. But the majority of its employees in the U.K. capital will still be largely at home despite its new digs.

“Employees will have complete autonomy to manage where they work, in a way that best suits their needs,” U.K. CEO Mark Cowlard said, echoing a widespread theme of increased choice for employees regarding where and how they spend their working days.The design of the new Arcadis office reflects that, with 20 different types of workspaces and 40% less office space than its predecessor.  Other businesses, including Standard Chartered Plc, are also reshaping their offices to reflect the likelihood of employees continuing in part to work from home.

In the U.K., rising case numbers have already dampened even the government’s enthusiasm for a wholesale return to work on July 19. Health Secretary Sajid Javid last week warned that there could be as many as 100,000 U.K. cases a day throughout summer -- more than double Thursday’s 48,553, which also saw the highest number of deaths recorded since March 25.

And while the government will scrap its work from home guidance on July 19, it isn’t easing other policies including the rule to self-isolate for fully vaccinated contacts of people who have tested positive for Covid-19. That won’t be removed until Aug. 16.

The Confederation of British Industry says such mixed messaging will leave offices empty and businesses lagging behind in the race to shore up their finances. “If I went to the pub last night and got pinged by track and trace, even if I test negative I still have eight days of isolation,” CBI spokesman Mark Mistry told Bloomberg.

Those concerns are reflected in occupancy data. Although a quarter of offices around the world were reopened for work in June, just 0.5% of offices are more than half full, according to data compiled by workplace optimization firm Freespace.

Nor is there much evidence of office interactions -- touted as the USP of workplaces -- taking off just yet. Just one in five people are using meeting rooms in contrast to more than half before the pandemic and just 6% of staff are accessing workplace social areas, compared with almost a third of workers before the Covid-19 crisis.Constant reminders of the risks of in-person meetings don’t help either. BT Group Plc held a virtual annual meeting in 2020 but on Thursday it returned to a partly in-person event for 2021, with shareholders and board members meeting in the City in London. However, at about 6 a.m. on the day of the event, BT's chairman Jan du Plessis tested positive for Covid-19, meaning he had to attend virtually anyway.

It all adds up to a slow return to the office. That’s not unexpected but remains bad news for districts like the City of London, whose lifeblood is the ebb and flow of hundreds of thousands of commuters and that have largely lain empty since the onset of the pandemic.

Little wonder the Square Mile is planning to mark noisily the end of restrictions. The bells of 25 of its churches will ring out on the last day of July, including St Paul’s Cathedral.Perhaps fittingly, few office workers will be around to hear. July 31 is a Saturday.