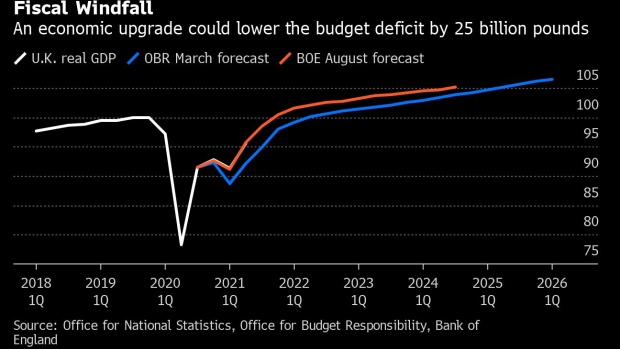 The U.K. Treasury is resisting pressure to increase spending in next week’s budget because of concern that doing so would backfire by prompting the Bank of England to raise interest rates more aggressively.

Government spending itself can cause inflationary pressures that would add to pressure on the BOE to tighten monetary policy, a Treasury official familiar with the government’s thinking said. The person asked not to be named, citing private deliberations in advance of a statement due on Oct. 27.

The outlook for a restrained budget adds to the sense that Chancellor of the Exchequer Rishi Sunak is planning only a few emergency giveaways after setting out plans to raise taxes by 12 billion pounds ($16.6 billion) to pay for improved health and social care.

“Given where inflation is, is it really sensible for the chancellor to unleash another fiscal loosening and push the question on to the Bank of England?” said Tim Pitt, a partner at consultancy Flint Global who previously advised the Treasury. “A chancellor hasn’t had to think for a long, long time about whether his fiscal position will cause a response from the BOE on monetary policy.”

Financial markets are widely anticipating the central bank will raise interest rates on Nov. 4 in an effort to keep inflation in check. The BOE anticipates consumer prices will leap more than 4% this year, more than double the target, after a 3.2% reading in August.

The chancellor is also expected to bank any long-term windfall to help fund tax cuts that he’d like to announce before a general election, which may come in 2023 or 2024. One Conservative member of Parliament said that the economic cycle is out of step with the political calendar, leaving the chancellor wanting to hold off on largess for now.

A Treasury spokesperson, responding to questions from Bloomberg News, said the budget and spending review “next week will set out how we will continue to invest in public services, businesses and jobs while keeping the public finances on a sustainable footing.”

Last week, the Office for Budget Responsibility, the independent fiscal watchdog, said it had been asked to finalize its forecast for the economy before a large upward revisions fed through to official gross domestic product data. With growth stronger than the OBR forecast earlier in the year, using the old numbers could leave the Treasury understating the scale of funds it has onhand.

“The U.K. economy looks set to comfortably exceed its growth and revenue forecasts for this year, while spending should undershoot,” said Elizabeth Martins, senior economist at HSBC Bank Plc. “We expect the OBR to revise down its borrowing projection for 2021/22. Had the chancellor not asked the OBR to close its forecast earlier than usual, the economic news would have been even better.”

Sunak has long expressed concerns about the damage that higher rates and inflation will do to the public finances. For the first time since 1997 when the BOE was handed authority to set rates, fiscal and monetary policy are now at risk of clamping down on the economy at the same time.

The Treasury is concerned that higher rates will hit the public finance by driving up the cost of servicing debt and also tighten a squeeze on consumers. In addition to the health tax increase coming in April, households are shouldering higher costs in stores due to the impact of Brexit border friction and a truck driver shortage, which has raised the price of goods.

The chancellor’s budget statement on Oct. 27 will include a three-year spending review based on an envelope set in March that’s unlikely to change. Plans to seek savings of up to 5% from each department may give the Treasury more flexibility to move funds around in future finance rounds.