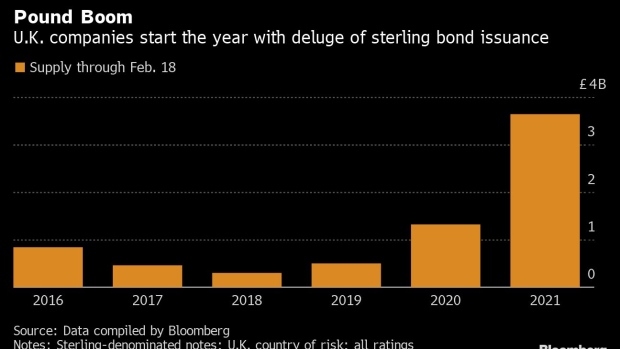 Visitors queue before receiving the AstraZeneca Plc and the University of Oxford Covid-19 vaccine outside a closed down Debenhams Plc department store, in Folkestone, U.K., on Wednesday, Jan. 27, 2021. A day after the British death toll passed 100,000, U.K. Prime Minister Boris Johnson said the government will review the impact of pandemic measures and the effectiveness of the vaccine program in mid-February. , Bloomberg

(Bloomberg) -- A world-leading vaccine campaign is bringing U.K. markets back to life.

With around 30% of the adult population receiving at least one shot, Prime Minister Boris Johnson is set to announce a roadmap for lifting lockdown on Monday -- adding fuel to the cross-asset rally.

Among the biggest moves of late: The pound has rallied faster than any other major currency this year. U.K. stocks have been generating outsized gains in dollar terms. Companies have been enjoying a borrowing bonanza that’s looking historic.

For many investors who fled in the aftermath of the 2016 Brexit vote, buying Britain looks like a safer bet today.

“We refrained from being overweight U.K. equities for many years as it has significantly lagged other regions ever since the Brexit referendum,” said Michael Herzum, head of macro strategies at Union Investment in Frankfurt. He’s now buying the FTSE 250 while selling the Eurostoxx Index.

As the U.K. economy looks poised for a recovery after the worst recession in three centuries, here’s how the catch-up trade is playing out.

As the country delivers one of the fastest immunization programs in the world, the pound is one of the hottest trades in currency markets -- gaining around 2.5% against the dollar this year.

Just last week, it breached the $1.40 threshold for the first time since 2018, while surging to the strongest versus the euro since the depths of the pandemic panic last March.

The sterling rally may now have fresh legs, as the U.K.-euro area monetary path diverges.

“Rates markets are starting to price in a future decoupling between the ECB and the BOE policy outlook, helped by the BOE effectively killing market speculation on negative rates,” said Valentin Marinov, head of G-10 currency research at Credit Agricole.

The yield on benchmark U.K. bonds has also risen faster than European peers and U.S. Treasuries in 2021, as markets price in a strong economic rebound and rising inflation expectations.

Another gauge of the business cycle signals more good news. The nation’s yield curve -- as measured by the difference between the rates on five and 30-year debt -- is the steepest since 2018 led by moves in longer maturities.

Even U.K. stocks are finding more love these days. For years billions have fled the Brexit-lashed market -- dubbed the least-loved region in the world.

Now, negative bets are on the wane, according to this month’s Bank of America Corp. survey. A net 10% of respondents have bearish positioning compared with 34% three months ago.

Sentiment is following price. While the FTSE 100 is lagging the Stoxx Europe 600 Index this year, on a dollar basis the index is besting a slew of companion gauges in the region.

The rise in the British currency has been driving the outperformance of the more domestically exposed FTSE 250 against the exporters-geared FTSE 100 since the market bottom in March 2020.

And there may be more juice left in the rally yet with valuations that are cheaper and dividend yields higher than global peers.

All this is helping U.K borrowers. At 3.8%, the average yield on sterling junk bonds, an indication of borrowing costs, is hovering near all-time lows.

Sterling junk debt offers a yield pick-up of almost 180 basis points after currency-hedging costs are taken into account and have outperformed peers in Europe -- a selling point for investors outside the country.

“A Brexit deal and the vaccine success means a lot of investors are starting to revisit,” the U.K. market, said Nicolas Trindade, a portfolio manager at Axa Investment Managers, which manages 758 billion pounds ($1.1 trillion).

It’s a different story for investment-grade securities that are more prone to rate risk than their euro counterparts. The longer average duration on sterling corporate debt means it suffers as gilt yields rise -- for investors that’s inflicted the biggest year-to-date loss since 2008.