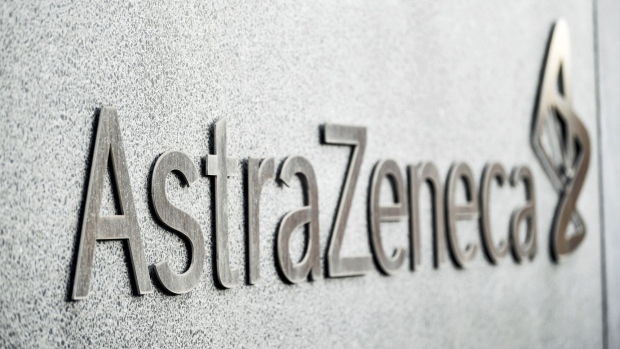 The AstraZeneca Plc sits on a wall at their facilities in Soedertaelje, Sweden, on Thursday, April 11, 2019. AstraZeneca raised its annual sales forecast, helped by demand for the U.K. drugmaker's roster of new cancer drugs. Photographer: Mikael Sjoberg/Bloomberg , Bloomberg

(Bloomberg) -- The U.K. has reconsidered plans to buy one million doses of AstraZeneca Plc’s Covid-19 antibody treatment, according to two people with knowledge of the situation.

While the first data from the treatment’s trials are expected in the coming weeks, the U.K. has no orders for it and is still evaluating the role antibody cocktails may play in Britain’s response to the pandemic, according to one of the people, who didn’t want to be identified because details of the discussions are private. Alok Sharma, the U.K.’s former business secretary, said in November that the country had procured the doses pending trial results.

The deal Sharma announced last year was a non-binding and in principle agreement, the person said. By contrast, the U.S. increased its order for the Astra antibody treatment by half a million doses in March, taking its potential supplies to 700,000 in 2021.

Monoclonal antibodies are aimed at protecting high-risk people such as cancer patients whose immune systems may not be able to cope with vaccination. The drugs can neutralize the virus and mimic the necessary immune response to avoid infection. Astra’s treatment -- AZD7442 -- proved effective against variants of the virus in early testing. The company is expected to report the first data shortly from a trial evaluating the drug’s ability to prevent infection in people who have been exposed to Covid-19 in places like nursing homes.

A spokesman for the U.K. Department of Health and Social Care declined to comment. A spokesman for Astra said the company is “working with international and government agencies around the world to enable broad access” to the treatment if it proves effective in trials.

Astra has five advanced-stage trials testing a combination of two long-acting antibodies for both the prevention and treatment of Covid-19 in different populations. The company said last month that, if the data were positive, it would apply for emergency authorization in the U.S., followed by other global submissions for clearance.

Unlike with vaccines, it’s much harder to scale up production of monoclonal antibodies. Drugmakers like Astra can only manufacture several million doses a year.

A number of antibody treatments have shown success in trials and been cleared for use. A cocktail treatment from from Eli Lilly and Co. was granted an emergency use authorization earlier this year, while GlaxoSmithKline Plc and Vir Biotechnology Inc. have applied for such clearance of their antibody drug, targeted at people with mild to moderate infection at risk of progressing to severe Covid-19.