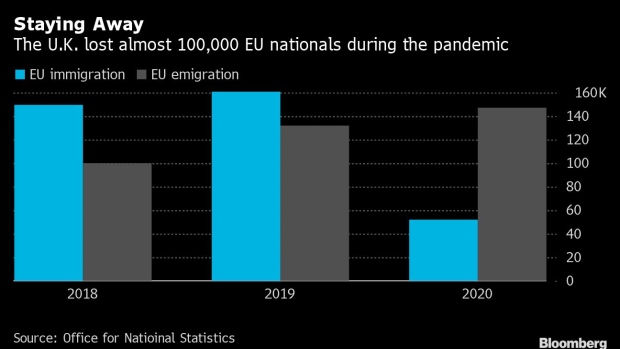 Office for National Statistics figures published Thursday show that the EU population in Britain shrank as more Europeans left the country than in 2019, and at least 100,000 fewer arrived.

The figures help to explain why companies are now struggling to recruit workers, particularly in sectors such as hospitality and retail that relied heavily on foreign staff before the pandemic struck. The squeeze is driving up pay and inflation, making it likely the Bank of England will raise interest rates as early as next month.

The ONS said Covid-19 and Brexit, with the U.K. formally leaving the EU in January 2020, were responsible for the drop but that it was “difficult to disentangle the effects.” The sharp fall in net immigration partly reflects restrictions on international travel to fight the spread of the coronavirus.

A separate and more up-to-date ONS population release for the year to June 2021 suggested that the trend continued early this year. The number of EU nationals living in the U.K. was estimated to have fallen by 200,000 to 3.4 million by that point.

The drop in EU nationals was offset by movement from other countries. An estimated 130,000 more non-EU nationals came to the U.K. in 2020 than left, but that figure was also sharply lower than recent years. In 2019, net non-EU immigration was 277,000.

As a result, overall net migration “fell considerably” to just 34,000 from average annual levels of 250,000 over the previous decade.

“Although there is no evidence of an exodus from the U.K. in 2020, global travel restrictions meant the movement of people was limited, with all data sources suggesting migration fell to the lowest level seen for many years,” said Jay Lindop, director of the Center for International Migration at the ONS.

“These are our best current estimates for international migration over this period,” he said. “However, they are modeled figures based on experimental research and subject to a high level of uncertainty,” he said.