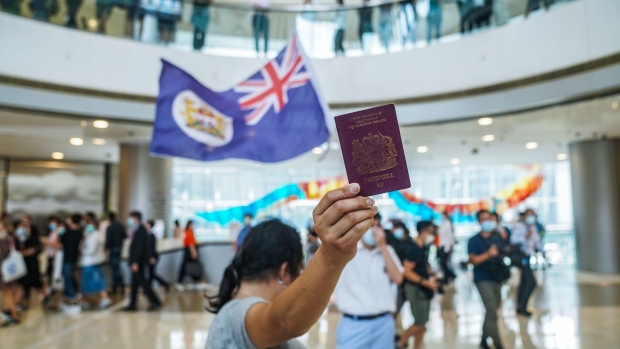 A demonstrator shows a British National (Overseas) passport as another waves a colonial-era Hong Kong flag during a lunchtime protest at the International Finance Center (IFC) shopping mall in Hong Kong, China, on Friday, May 29, 2020. Hong Kong leader Carrie Lam issued a letter to the city's people asking them to understand and support national security legislation that has sparked the biggest protests since last year and fresh concerns about future autonomy from China. , Bloomberg

(Bloomberg) -- Foreign Secretary Dominic Raab said China could block Hong Kong citizens from leaving the region to take up Boris Johnson’s offer of a new home in the U.K. -- and the British government would be powerless to stop it.

Johnson’s government promised almost 3 million people in Hong Kong new visas and a path to U.K. citizenship after China enforced a sweeping security law on the former British colony. The prime minister called the legislation a “clear and serious breach” of the 1984 handover treaty between London and Beijing.

China hit back on Wednesday, questioning the U.K.’s right under the “joint declaration” treaty to make the offer to people in Hong Kong, and warned it will “reserve the right to take corresponding measures.”

The dispute over the new security law brings U.K.-China relations to their lowest point in decades, marking a decisive end to the “golden era” of relations that President Xi Jinping and the then prime minister, David Cameron, envisioned five years ago.

The potential ramifications are wide, with Chinese investment in key U.K. infrastructure, including mobile networks and nuclear power stations, now coming under intense scrutiny. Tensions are also growing between British officials and banks that have endorsed the new security law.

Under the U.K. plan, the status of British National (Overseas) passport holders will be upgraded to offer them a path to U.K. citizenship. BNO passports are held by 350,000 people in Hong Kong, with a further 2.5 million eligible for them.

Raab was asked on ITV’s Peston show what the British authorities could do if China tried to block Hong Kong Chinese people from coming to the U.K. “Well, there’s of course all of the international diplomacy that we’re engaged in, but ultimately if they follow through on something like that, there would be little that we could do to force them,” he replied.

“I think we need to be realistic,” Raab said. China is “sensitive” to the risk to its reputation from the international criticism it has faced over the new law, he said, “but clearly not sufficiently that it hasn’t proceeded anyway.”

Fadi Farhat, senior legal officer at immigration solicitors Gulbenkian Andonian, said there had been a “spike” in interest from Hong Kong residents and the firm has set up a separate email address to deal with the increase in inquiries.

“Legally there are plenty of problems potentially,” Farhat told Bloomberg Radio on Thursday. “China says that this potential policy by the U.K. government will breach the joint declaration.”

In a statement on Wednesday, the Chinese Embassy in London said the U.K. had previously promised “it will not confer the right of abode to Chinese citizens in Hong Kong who hold BNO passports.” All Chinese compatriots living in Hong Kong count as Chinese nationals, “whether or not they are holders of the British Dependent Territories Citizens passport or the British National (Overseas) passport,” the Embassy said.

On Thursday, Australian Prime Minister Scott Morrison said his cabinet is “very actively” considering offering Hong Kong citizens safe haven. He didn’t provide details on how that would be arranged.

“We think that’s important and very consistent with who we are as a people,” said Morrison, whose government has had its own clashes with China this year that have soured relations with its largest trading partner.