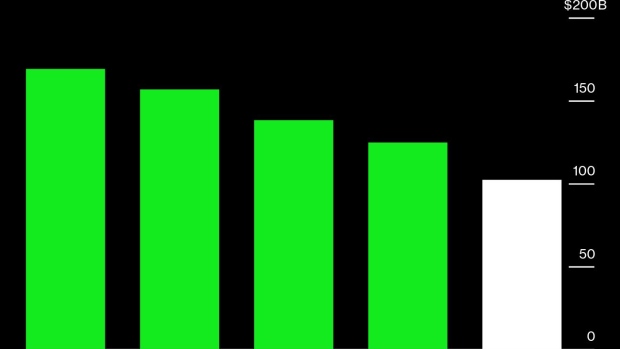 Onshore wind turbines on the Bradwell Wind Farm near Bradwell on Sea, U.K., on Tuesday, Sept. 21, 2021. U.K. Business Secretary Kwasi Kwarteng warned the next few days will be challenging as the energy crisis deepens, and meat producers struggle with a crunch in carbon dioxide supplies. Photographer: Chris Ratcliffe/Bloomberg , Bloomberg

(Bloomberg) -- The U.K. sold the world’s longest sovereign green bond yet as it tapped pension fund cash to start building a yield curve.

The country racked up more than 74 billion pounds ($102 billion) in orders via banks for the 6 billion-pound sale of its second green gilt, due to mature in July 2053. That was the highest ever bid-to-cover ratio, at more than 12 times, for any sovereign green issuance, according to Bloomberg data, though the total orderbook fell short of the U.K.’s record-breaking debut last month.

This follow-up will be the longest maturity available to investors in environmental assets, beating 30-year debt issued by Indonesia, Hungary and Hong Kong. It follows a trend of European nations going long this year to lock in low borrowing costs and build nascent green markets.

Selling such debt that matures decades away may involve dangers from climate change that are not adequately reflected by sovereign credit ratings, according to some critics. Still, the orders poured in even after a sell-off in U.K. bonds at the start of the week, as funds shrugged off short-term worries over interest-rate hikes.

Demand was strong since the gilt is a “longer bond in this volatile market,” said Pooja Kumra, senior European rates strategist at TD Securities. “The back-up in yields and pension fund and liability-driven investment demand provided extra support for this issue.”

Pricing was set at 1 basis point below comparable bonds. Investor interest in green debt is typically so high that it commands a price premium, or “greenium,” versus conventional bonds. In this case it’s likely to be around 2 to 3 basis points, Kumra said.

The U.K. has its own framework on how the funds can be used, including for spending on zero-emission buses, wind and solar power, and carbon capture. The Treasury published a review this week of plans to decarbonize the economy, before the U.K. hosts a major United Nations climate gathering.

The syndication was delayed from earlier this week, leading analysts including Peter Chatwell at Mizuho International Plc to question whether that might have been because of the market volatility. The decision to delay was to ensure the market had sufficient time to absorb government announcements on its sustainability strategy, said Kerr Finlayson, head of frequent borrowers group syndicate at NatWest Markets Plc, one of the arranging banks.

Robert Stheeman, head of the U.K.’s Debt Management Office, has said this second sale would appeal to the traditional domestic gilt investor base of pension funds and insurance companies. Asset management companies are under pressure from both clients and regulators to green their holdings and assess their long-term risks from climate change.

“We did participate in this as it is more an area of the curve where we generally invest,” said Ben Clissold, head of fixed income and treasury at USS Investment Management, the U.K.’s largest private pension scheme. “We would be keen to see the DMO issue longer-dated nominal and inflation-linked green gilts.”