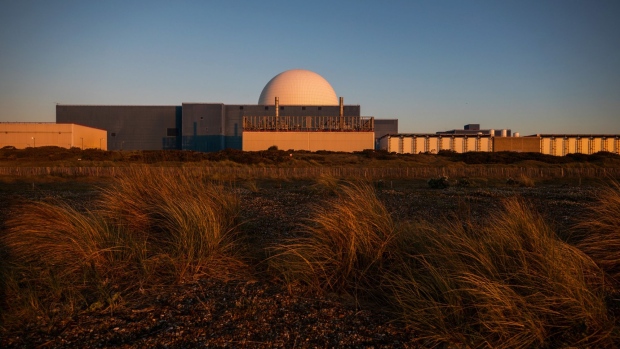 The Sizewell B nuclear power station, operated by Electricite de France SA (EDF), stands in Sizewell, U.K., on Friday, May 15, 2020. The network operator struck a deal with EDF to cut supply at its Sizewell nuclear plant by half for at least six weeks because the demand for power is 20% lower than normal as measures to contain the coronavirus have shut industry and kept people at home for weeks. , Bloomberg

Britain plans to legislate as soon as next month for a funding mechanism to spur the construction of new nuclear power plants to replace its aging fleet of reactors.

The U.K. is likely to need low-carbon power from nuclear to meet its net-zero targets as well as help avert the kind of energy crisis that’s currently crippling the country. The nation’s existing reactors are scheduled to close by the end of the decade and building replacements has been a struggle, with two major projects shelved because of financing issues.

The so-called regulated asset base, or RAB, model is a government-funded mechanism designed to encourage private-sector investment in a project, which is meant to dilute the construction costs shouldered by the taxpayer and developer. It’s the same plan that’s been used to fund airports and water companies.

The RAB model is the government’s preferred method of financing, a person familiar with the matter said. The mechanism would underpin a final investment decision in Electricite de France SA’s 20 billion-pound ($27 billion) Sizewell C nuclear plant project in southeast England, which could include the government taking a stake.

The U.K. has committed to unlocking investment in at least one large-scale nuclear plant by the middle of the decade and has been in talks with EDF since December.

The government’s recent move to exclude China General Nuclear Power Corp. from the Sizewell C project has complicated the project. Negotiations are ongoing with Sizewell about the Chinese stake, said the person, who declined to be identified because the matter is private.

The U.K. has said it will press ahead with the Sizewell C nuclear project even without Chinese funding as the government hardens its stance toward China due to security issues.