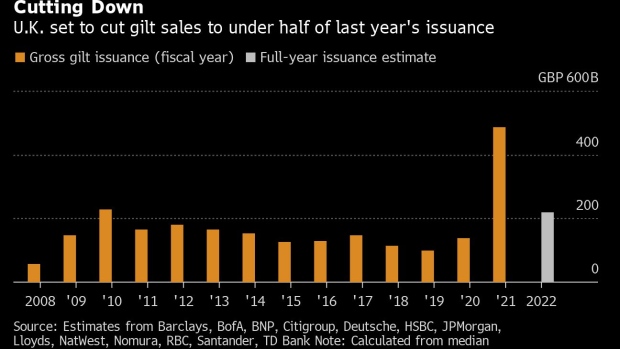 (Bloomberg) -- The U.K. is expected to trim gilt sales this fiscal year by about a tenth from its most recent target, after the government undershot borrowing forecasts.

The Debt Management Office will reduce bond issuance to 219.6 billion pounds ($302 billion), according to the median estimate in a Bloomberg survey of analysts at 13 primary dealers.

The reduction would follow a record cut to sales in April, in keeping with Britain’s efforts to curb a debt spree at the height of the pandemic. Strategists say such a dramatic cut is likely to be a boost for gilts in the short term, mitigating some of the impact from the looming end of the Bank of England’s 875-billion pound bond-buying program by December and expectations for monetary policy tightening over the next year.

“Long-term investors will have been expecting to take advantage of the ample opportunities to buy gilts and linkers over the next few months,” said Daniela Russell, head of U.K. rates at HSBC Holdings Plc, which sees the DMO cutting gross gilt issuance by 32 billion pounds. “A sharp reduction could potentially cause a bit of squeeze in valuations if those investors rush in to buy.”

The U.K.’s borrowing update comes after a turbulent month in bond markets, spurred by traders ramping up rate-hike bets to around 100 basis points by the end of next year. That has driven declines primarily in shorter-maturity debt, and has forced investors to come to terms with the prospect that the BOE could scale back support for gilts sooner than expected.

The culmination of central-bank purchases at the end of the year will mean there will be fewer buyers chasing depressed supply. That could keep the overall market impact “limited,” according to Amarjot Sidhu, European economist at BNP Paribas SA. “You have this decrease in demand on the one hand, but you also have this loss of supply from the reduction in gilt issuance,” Sidhu said.

One route for the DMO to offset some of the reduction in gilt issuance would be to cut the stock of Treasury bills, according to RBC Europe Ltd. Analysts at the bank say a cut of around 10 billion to 15 billion pounds would achieve a “smoother transition.”

Government borrowing this year trailed the Office for Budget Responsibility’s estimates by almost 30% this year, as the uncertainty of the pandemic wreaked havoc with usual forecasting models. That’s left the DMO balancing the expectations of investors and the funding needs of the U.K. government.

Some analysts see the DMO putting some of this year’s issuance toward financing needs for the next fiscal year, otherwise known as over-funding.

That’s one reason for JPMorgan Chase Bank analysts’ forecast of 225 billion of gilt sales, which is above the survey median. The analysts see “the potential for a downward adjustment” for 2022-2023, given they expect the DMO to issue more debt than required by the government for the current fiscal year.

Meanwhile, analysts at Citigroup Inc. wrote that this would be “against the spirit of full-funding,” noting that the DMO’s mandate is to issue only enough debt to fund the government’s borrowing needs -- no more and no less. They see gross gilt issuance falling by as much as 45 billion pounds to 207.6 billion, below the survey median.