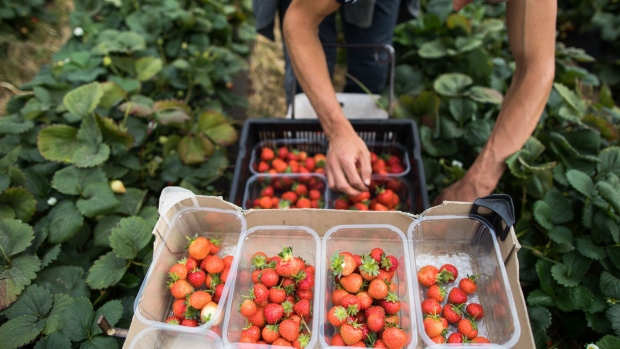 A fruit picker picks strawberries at a fruit farm in Hereford, U.K., on Tuesday, Aug. 21, 2018. Restrictions on free movement of labor could have an impact on farmers' ability to grow and harvest food. Photographer: Chris Ratcliffe/Bloomberg , Bloomberg

(Bloomberg) -- The U.K. will set up a new commission to inform its post-Brexit agricultural policy, bowing to pressure from British farmers and potentially complicating trade negotiations with the U.S.

The commission will “help inform agricultural trade policy and apply appropriate safeguards in U.K. free trade deals,” Truss wrote in the letter to NFU President Minette Batters. “I wholeheartedly agree that any trade deal the U.K. strikes must be fair and reciprocal to our farmers.”

Agriculture is a major sticking point in the trade talks between Britain and the U.S., an obstacle Prime Minister Boris Johnson must overcome to secure a deal with the country’s biggest trade partner outside the European Union. The U.K. is seeking free-trade agreements around the world as it carves out a new role outside the 27-member bloc.

The U.S. has made increased market access for its agricultural products a key precondition for any deal. But some U.K. politicians and officials -- as well as farmers -- are worried about the potential import of items including chlorine-washed chicken and hormone-treated beef, which they consider a threat to food safety and production standards.

Farming is an especially sensitive issue for Johnson’s Conservative Party, given many Tory strongholds in England are in rural agricultural areas, according to Sam Lowe, senior research fellow at the Center for European Reform.

“It was always going to be difficult for the U.K. to open up its agriculture sector to increased competition from American producers and others,” Lowe said. “The party ostensibly most in favor of free trade and liberalization also has the most to lose.”

Batters welcomed the commission’s creation but said Parliament must be able to scrutinize its findings and ensure the government implements them “effectively.”

“The NFU will continue to scrutinize the progress of trade negotiations with the USA and other countries over the coming months,” Batters said in a statement.