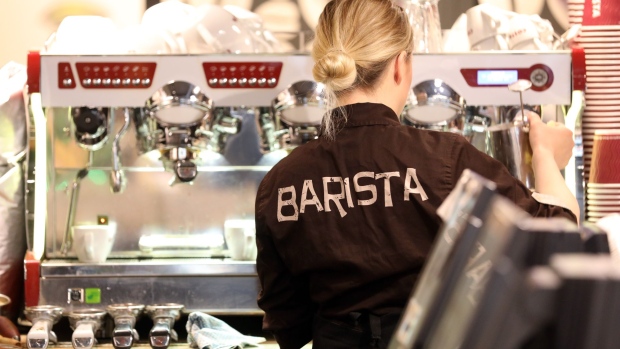 A barista uses a coffee machine to froth a container of milk behind the counter of a Costa Coffee shop, operated by Whitbread Plc, in London, U.K., on Wednesday, May 2, 2018. Whitbread is betting that its faster-growing Costa Coffee chain will compete more effectively against the likes of Starbucks Corp. once separated from the company's hotel business. Photographer: Chris Ratcliffe/Bloomberg , Bloomberg

U.K. Prime Minister Boris Johnson should postpone a planned increase in the minimum wage to ease the pressure on firms hit by the coronavirus crisis, according to a think tank.

But the Institute for Fiscal Studies says the hike would add to the burden of companies now struggling to stay afloat and lead to job losses, undercutting government attempts to combat the fallout from the virus pandemic.

“Given these circumstances, the government might do well to postpone the upcoming rise until the crisis has ended,” IFS economist Tom Waters said in a note published Wednesday. “They should ask the Low Pay Commission for advice on whether there might even be a case for a temporary cut in minimum wages.”

Waters argued that workers who lose out would be compensated by recently announced increases in welfare benefits and tax cuts.

In a separate report, the Resolution Foundation said the government should widen wage subsides to self-employed workers and those who have already lost their jobs, rather than limiting the program to people put on temporary leave by their employers.

Such a guarantee would cost around 3.6 billion pounds for three months if 1 million people claimed it, the think tank said.

Chancellor of the Exchequer Rishi Sunak last week announced the government will pay 80% of the wages of employees at risk of losing their jobs. Bloomberg Economics puts the cost of the program at over 17 billion pounds.