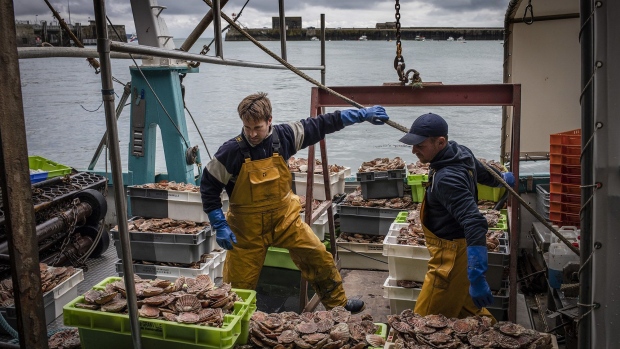 French fishermen unload the day's catch from their boat on May 6, 2021 to store in the fishery harbour of Granville, France. French fishery representatives call on the urgency of the situation concerning the restrictions put in place in Jersey waters with regard to French fishing vessels. , Photographer: Siegfried Modola/Getty Images

(Bloomberg) -- The U.K. government hit back at France over its proposed retaliatory measures in a dispute over fishing access, as post-Brexit tensions between the two countries rose further.

“France’s threats are disappointing and disproportionate,” 10 Downing Street said in a statement Wednesday, after a French government spokesman said they may disrupt the flow of trade with Britain and energy supplies to the Channel Islands due to a lack of fishing licences given to French boats since Brexit.

“The measures being threatened do not appear to be compatible with the trade and cooperation agreement and wider international law,” Downing Street said, referring to the post-Brexit trade deal signed on Christmas Eve last year. The measures “will be met with an appropriate and calibrated response,” the statement said.

Access to British waters for EU boats has been a long-running sore point in the post-Brexit relationship between the U.K. and its largest trading partner, leading to a major escalation earlier this year when both Britain and France deployed naval warships in the English Channel. France’s complaint is that some of its boats are unfairly being denied access to fishing grounds where they have operated historically, whereas Britain says it is merely enforcing the terms of their post-Brexit accord.

France has set the U.K. a deadline of Nov. 2 to give boats more licenses, after which it says it will implement its retaliatory measures. These include systematically applying customs and health checks to goods unloaded in French ports, which likely cause major traffic queues around the critical Port of Dover.

“Our patience is reaching its limits,” French government spokesman Gabriel Attal said to reporters in Paris on Wednesday. “Our wish is quite simply that the accord that we reached can be respected.”

A problem in the fishing dispute is that the U.K. is asking for boats to provide evidence that they have fished in British waters historically, something that older French vessels with less sophisticated technology have struggled to do. The U.K. government says it has granted 98% of licence applications from EU vessels since Brexit, while France says the U.K. is introducing evidence requirements for applications that weren’t present in the Brexit trade deal.