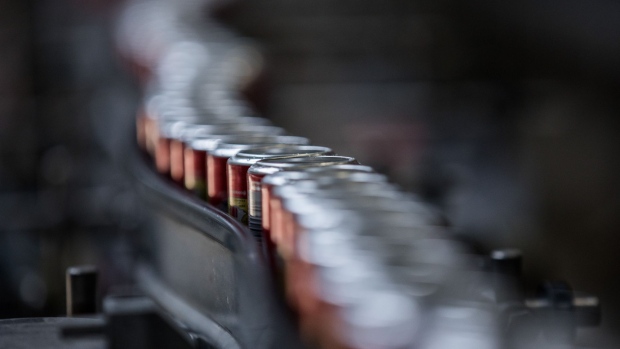 (Bloomberg) -- The British Soft Drinks Association said manufacturers have “only a few days” of carbon dioxide left in reserve to produce beverages and can’t import supplies from the European Union due to Brexit.

In the latest sign of how a widespread shortage of CO2 is causing shock waves in Britain’s food and drink sector, most carbon dioxide suppliers aren’t scheduling deliveries earlier than 24 hours in advance, which means manufacturers have no visibility on stock levels or when they will receive their next batch, the trade group said in a statement Monday.

The U.K. also can’t rely on imports from Europe as a Dutch plant it sources CO2 from is prioritizing EU clients and the Norwegian plant is shortly due to close for maintenance for up to two weeks, the group said.

Supplies of CO2 have been hit in Britain after fertilizer maker CF Industries Holdings Inc. responded last week to surging natural gas prices by closing U.K. plants that make carbon dioxide as a byproduct. Rival Yara International ASA is also curtailing European capacity. The knock-on effect on the food and drink industry has been sudden and dramatic as the gas is used in a number of ways from stunning pigs and chickens for slaughter to extending the shelf life of products and producing carbonated drinks.

The shortages are compounding an already fraught U.K. food supply chain that has been battling to keep shelves stocked due to a lack of warehouse workers and truck drivers as a result of Brexit and the pandemic.

The trade association’s warning comes a few hours after AG Barr Plc, which produces carbonated drinks including Scotland’s Irn-Bru, warned that its production could be impacted if the situation worsens across Europe. The Scotsman newspaper earlier reported that supplies of the orange-colored drink were at risk.

The U.K. has been hit by a shortage of carbon dioxide before in 2018 when operators closed production facilities down for maintenance. This time’s different, the British Soft Drinks Association said, with two of the biggest fertilizer plants that supply carbon dioxide ceasing operations indefinitely.