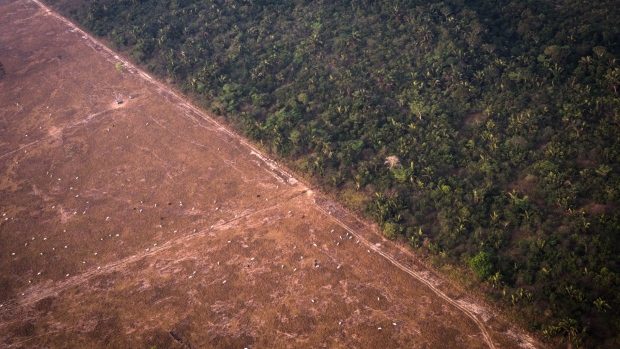 A field scorched by wildfires stands in the Amazon rainforest in this aerial photograph taken near the Candeias do Jamari region of Porto Velho, Rondonia state, Brazil, on Saturday, Aug. 24, 2019. The world's largest rainforest, Brazil's Amazon, is burning at a record rate, according to data from the National Institute of Space Research that intensified domestic and international scrutiny of President Jair Bolsonaro's environmental policies. Photographer: Leonardo Carrato/Bloomberg , Photographer: Leonardo Carrato/Bloomberg

(Bloomberg) -- The U.K. government is asking world leaders to pledge to halt deforestation by 2030. But Brazil -- home to the Amazon rainforest -- has yet to sign, raising questions about how effective it can be.

The European Union, Indonesia and Democratic Republic of Congo are among those who have already agreed to support the Glasgow Leaders’ Declaration on Forests and Land Use, according to people familiar with the matter. A quarter of the world’s emissions come from forests being converted into farmland.

The declaration, due to be unveiled on Nov. 2, will be one of a dozen mini deals that the U.K. COP26 presidency is asking countries to back alongside the main climate negotiations. With talks on goals such as reducing coal use looking increasingly difficult, the U.K. hopes these side deals will allow smaller groups of countries to go faster in their efforts to curb global warming -- even if it’s at the expense of key countries opting out.

The proposed declaration aims to funnel public and private money into protecting forests, setting a target of 2030 to halt and reverse forest loss and land degradation, according to a draft text. It’s separate to efforts to set up a global carbon offset market, which are a key part of COP26 talks.

The draft declaration also includes a proposal to redesign agricultural policies to protect the environment -- a potential sticking point but an important issue as deforestation is often linked to farming.

A U.K. official said the final text of the declaration was still being developed and could change until the day it is announced. Countries have until Monday to confirm their support.

Brazil hasn’t backed it yet and would prefer existing programs to be bolstered instead. It also objects to the lack of a clear definition of sustainable agriculture, according to an official in Brasilia. Brazil’s environment and foreign affairs ministries didn’t respond to requests for comment.

United Nations programs to tackle deforestation are piecemeal and frequently criticized for failing to deliver on their promised emissions savings. For example, the Redd+ initiative, which stands for Reducing Emissions From Deforestation and Forest Degradation, was agreed in 2013. But areas of forest can qualify in the program even when logging still occurs within them.

Brazil has been battling claims that it’s destroying the Cerrado area, which has savanna-like vegetation, to grow soybeans, while cattle is still being raised in parts of the Amazon.