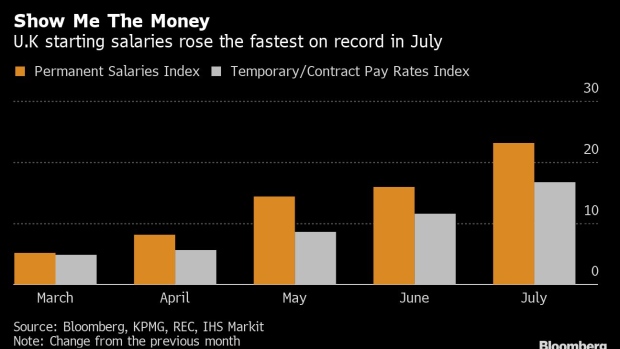 An office worker at a desk in view of Tower Bridge in the offices of Arcadis NV, after increasing their workplace capacity on July 19, in London, U.K. on Monday, Aug. 2, 2021. A survey this month showed that just 17% of London’s white-collar workers want a full-time return, and many said it’d take a pay rise to get them back five days a week. Photographer: Jason Alden/Bloomberg , Bloomberg

(Bloomberg) -- Starting salaries in the U.K. surged at the fastest pace in at least 24 years as employers try to squeeze more workers out of a shrinking pool of candidates, a survey showed.

Pay for new hires reflects increasing competition for staff to fill jobs that opened with the loosening of pandemic restrictions, KMPG and the Recruitment and Employment Confederation said. Their report indicates inflationary pressure on wages after Britain’s exit from the European Union reduced the number of workers.

British companies from retailers to construction firms are struggling to fill gaps in their workforce after Brexit reduced immigration from the EU and the pandemic prompted workers to seek more secure jobs.

“It’s a good time to be looking for a job,” said Kate Shoesmith, deputy chief executive of the REC. Still, she said new immigration rules are key to meet the surge in labor demand. “Skills shortages have been with us for a while and as our data shows are getting worse.”

Vacancies grew at the fastest pace since the survey started in 1997. The number of people seeking to fill them dropped almost as rapidly as the record pace in June.

Hiring for permanent roles in London and the Midlands rose the fastest on record, out-pacing the South and North of England. Job vacancies expanded across all sectors, led by IT and computing.