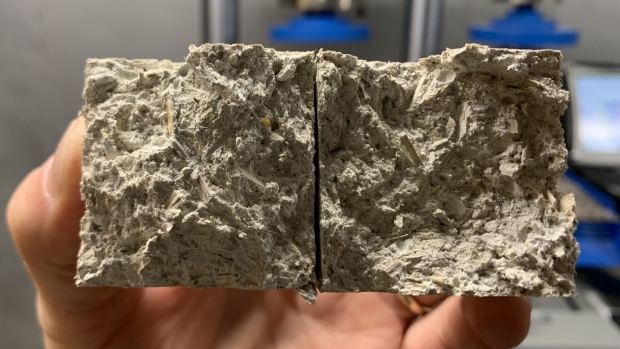 (Bloomberg) -- British startup Adaptavate is proving that one of the world’s most common building materials doesn’t have to harm the climate.

The company has designed a new plasterboard made from agricultural waste and a lime-based binding agent that absorbs carbon dioxide. The approach eliminates the need for gypsum, an emissions-intensive material that is used to make most of the basic construction material available today.

“Our technology is a direct alternative to the third-most used building material in the world,” says Tom Robinson, founder and managing director of Adaptavate. “It’s on everyone's walls.”

Robinson says that, like most people, he had been aware that cement and steel have a huge impact on global emissions. But while working as a builder himself, Robinson learned about the emissions intensity of gypsum-based plasterboard. That led him to pursue a degree in sustainable architecture to try and figure out a climate-friendly alternative.

Plasterboard, or drywall, is used as a lightweight building material to make walls inside homes and commercial buildings. In 2020, 8.4 billion square meters of the material was sold globally, according to market research firm Mordor Intelligence. That’s enough to cover an area larger than the U.S. state of Delaware.

In the U.K., plasterboard is responsible for 3.5% of the country’s annual emissions, according to a University of Bath study. That’s about half as much as the country’s aviation sector contributes each year. Globally, the building sector accounted for as much as 38% of energy-related emissions in 2019, according to the United Nations Environment Programme.

Adaptavate’s product is likely to be about twice the price of the cheapest plasterboard available in the market today. But that shouldn’t be a problem, says Robinson. About half the plasterboard market is for “premium” products that offer benefits such as better noise insulation, and that’s where Adaptavate’s climate-friendly board could compete.

The company has raised 2.2 million pounds ($2.9 million), much of which will go toward building a pilot line in Bristol, England that will churn out industry-standard plasterboards for testing. Adaptavate aims to use waste CO₂ trapped from the smokestacks of factories, such as those making cement, which it would pass over its mixture of agricultural waste and lime binder. Lime is a compound called calcium oxide that can absorb CO₂ to form calcium carbonate. It gives Adaptavate’s plasterboard material mechanical strength as it solidifies.

Once that proof of concept is up and running, the company plans to license its technology to manufacturers of building materials. Adaptavate is already in talks with three potential partners, Robinson said. Its funding came from Low Carbon Innovation Fund, carbon-removal fund Counteract and a grant from the U.K. government.