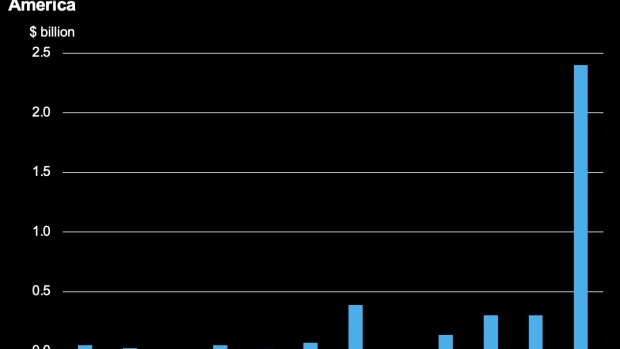 (Bloomberg) -- A U.K. startup backed by China’s Tencent Holdings Ltd. proved a novel approach to generating fusion energy in a breakthrough that could slash the technology’s cost by providing cheap, clean nuclear fuel.

First Light Fusion Ltd. is among about two dozen startups trying to harness the power that makes stars shine. Some focused on building machines that hold fused atoms together, while the Oxford-based company concentrated on the fuel elements that catalyze the reaction.

First Light used a hypervelocity gun, which engineers call their “Big Friendly Gun,” to fire a projectile at 6.5 kilometers (4 miles) a second into a fuel target to generate energy. Each thimble-sized target, which is heated and compressed at extreme density, could release enough energy to power an average U.K. home for two years, the company said.

“We have identified a genuine route to commercial fusion,” First Light Chairman Bart Markus said in a statement. “Fusion must show it is more than an expensive science experiment.”

Rather than splitting atoms like in traditional fission reactors, fusion plants seek to bind them together at temperatures 10 times hotter than the sun. Doing so releases huge quantities of carbon-free energy with no atomic waste.

Globally, more than $3 billion has poured into private fusion startups such as TAE Technologies Inc. and Commonwealth Fusion Systems in the U.S.

First Light, which also is backed by IP Group Plc and Oxford Sciences Innovation Plc, plans to manufacture the fuel targets for $10 to $20 each, and it’s working with UBS Investment Bank AG to explore “strategic options.”

“This pursuit of practical and affordable fusion will give us the clean and abundant baseload power that we so desperately need in our effort to address -- and hopefully reverse -- global warming,” co-founder Yiannis Ventikos said.

Laboratories such as the $3.5 billion U.S. National Ignition Facility have been inducing fusion for years by bombarding gold-encased exotic elements with high-energy lasers.

First Light worked to drive down costs by replacing lasers with gas guns and swapping out precious metals in the fuel. That approach is about 1,000 times cheaper, Chief Executive Officer Nicholas Hawker said.

“The physics is simpler,” Hawker said.