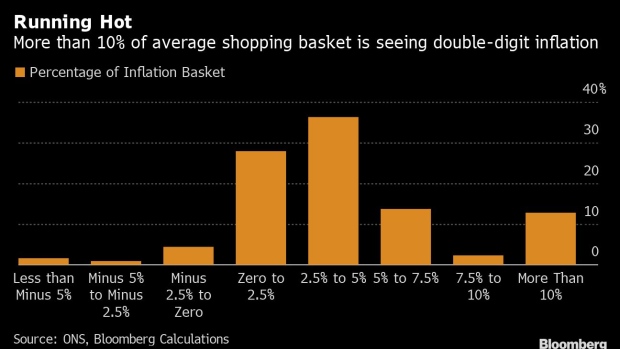 A shopper passes a market stall selling fresh fruit and vegetables in Croydon, Greater London, U.K., on Monday, Jan. 17, 2022. Inflation figures for the U.K., due on Wednesday, are likely to hold steady in December, before peaking in April at around 6.5%. Photographer: Chris Ratcliffe/Bloomberg , Bloomberg

More than 10% of goods and services in the average British shopping basket are rising in cost at a double-digit pace.

Gasoline, electricity, natural gas, second-hand cars and items for babies are among the goods whose price is rising most quickly, according to data from the Office for National Statistics released Wednesday.

The figures highlight the cost-of-living crisis hitting consumers, which is threatening to drag down the pace of the recovery and force the Bank of England to raise interest rates again.

The headline rate of inflation hit a three-decade high of 5.4% last month. About 13% of the goods and services tracked by the ONS to produce the consumer price index are rising by 10% or more from a year ago.