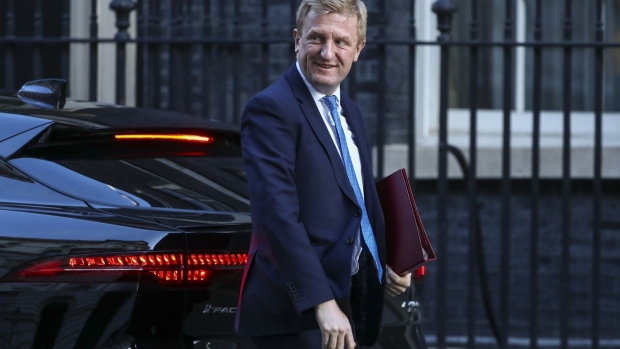 Questioned by Parliament’s Defence Committee on Tuesday, Dowden conceded that “ultimately” Huawei equipment wouldn’t be used. “But there is a big difference as to the path to getting to that point,” he said.

Boris Johnson’s government announced in January that Huawei would be allowed to supply equipment for the U.K.’s 5G networks. At the time, officials argued that bans on Huawei’s use in sensitive geographic areas and “core” technical components would sufficiently mitigate any risks, while still allowing Britain to take advantage of the new technologies it will enable.

The decision to allow the Chinese company into the networks outraged not just U.S. President Donald Trump’s administration but also Members of Parliament in Johnson’s own Conservative Party.

China’s behavior since then over both coronavirus and Hong Kong has done nothing to allay those concerns, meaning Johnson faces defeat in Parliament if he tries to push the decision through. The U.S. has also imposed sanctions “designed to make 5G designed by Huawei very hard to do,” Defence Secretary Ben Wallace, sitting alongside Dowden, told the committee.

The fresh U.S. sanctions, introduced in May, put Huawei’s microchip supply in jeopardy. They’re “likely to have an impact on the viability of Huawei as a provider for the 5G network,” Dowden said, but he wouldn’t comment on potential changes to the company’s legal status. He also wouldn’t commit to a deadline for removing Huawei.

But he did say the government is considering trade and financial incentives for rivals, which could bolster a push to diversify the U.K. supply chain away from its reliance on Huawei and its Nordic rivals Nokia Oyj and Ericsson AB. Officials are holding “constructive” talks with potential new market entrants, he said.

“Both Samsung and NEC are obvious vendors that we would like to get into the U.K. market” and officials are examining ways to cut costs for new entrants, Dowden said. “We’re looking at things such as trade incentives for incoming vendors, financial incentives. We’re looking at all those ways of trying to ease a pathway in for them.”

The caps on Huawei introduced in January will already cost about 1.5 billion pounds ($1.9 billion) to implement and entail a year-long delay to network deployment, and stricter rules would mean further costs, Dowden said.

The National Cyber Security Centre has now reviewed the likely impact of those U.S. sanctions, paving the way for a decision on the future role for the Chinese company from the National Security Council, chaired by Johnson. Ministers and officials are now considering their next steps.

“No decisions have been made,” Dowden said. “If national security requires it, we won’t hesitate in applying restrictions which will impose higher costs.”